Get a PDF version of this Case Study!
Download 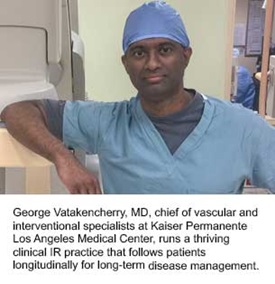 As a musician and songwriter, Cherish Alexander has been described as having a “magical pen that dips into the dark crevices of the human heart.” As a young patient being treated for uncontrollable hypertension, she relied on George Vatakencherry, MD, to wield his own “magical pen” in a procedure that would save her life.

The chief of vascular and interventional specialists at Kaiser Permanente Los Angeles Medical Center met the 43-year-old Los Angeles artist after numerous specialists had been unable to manage her extremely high blood pressure with five separate anti-hypertensive medications. After various specialists determined that Alexander’s right kidney wasn’t functioning, they referred her to Vatakencherry to consider treatment, including potential embolization of the smaller, poorly functioning kidney, to see if that could be the actual source of her hypertension.

But before Vatakencherry proceeded with the embolization, he spent over an hour in his outpatient clinic consulting with Alexander and her husband and reviewing her symptoms, history, and scans — ultimately diagnosing her with renal artery stenosis from fibromuscular dysplasia. She underwent confirmatory angiography and, ultimately, a curative balloon angioplasty of the left renal artery.

“We both knew something was off — that I wasn’t well — and he was the only one who took time to figure it out and treat it,” Alexander says, as she recalls Vatakencherry’s commitment to listening to his patients. Now, 15 months after surgery, Alexander remains under his care, medication free and rejoicing in having lived what she calls the “best year of my entire life.”

Vatakencherry began thinking about IR as a clinical practice about a decade ago after he noticed that IRs who focused solely on procedures were frequently being “outcompeted” for the procedures in which they were trained. The management and longitudinal follow up was delegated to other physicians.

Eager for a change, Vatakencherry went to a training program led by Thomas O. McNamara, MD, a vascular and interventional radiology physician now practicing in Nevada and California, who demonstrated the ability to manage patients’ peripheral arterial disease comprehensively, as well as longitudinally, and was admitting his own wound-care clinic patients to the hospital under his service.

Comprehensive management of patients included counseling them on smoking cessation, starting them on exercise regimens, initiating statin and antiplatelet therapy to prevent heart attacks and strokes, and performing wound care. McNamara developed a lifelong relationship with his patients who would be followed indefinitely in his outpatient clinic.

Inspired by McNamara, Vatakencherry decided to develop an outpatient IR clinic to care for his patients and worked tirelessly to establish it at Kaiser. “As a clinical interventional radiologist, you can add a great deal to your patient’s overall care because of your breadth of knowledge from head to toe. And, if you treat a patient longitudinally, you know the ins and outs of treatment better than anyone else,” he says.

Vatakencherry’s initial goal was to guide and counsel patients about their procedures and create a place to follow patients while providing ongoing care. The clinic exceeded his — and everyone else’s — expectations.

Before Vatakencherry began the clinical endeavor in 2005, a specialist would refer patients for IR procedures, and the interventionalists would execute the procedures with limited or no patient follow up. In implementing his clinical model, however, Vatakencherry started meeting with patients prior to intervention to discuss the details of their conditions.

Without a clinical space of his own, Vatakencherry consulted with patients in a tiny space near the interventional suites, and then had to walk them to urgent care for their physical exams and escort them for laboratory tests, as needed.

While he saw just six patients every other week, Vatakencherry’s clinical work had a significant impact on improving patient outcomes and making patients feel more at ease. He gave patients medications for contrast allergies, provided pre-procedural instructions, ordered labs and additional imaging, and was available for follow-up concerns. In satisfaction surveys, patients indicated that they had a much greater understanding of their own disease and the impact of interventional treatments in their overall care.

Making the Case to Specialists

While the benefits of consulting with patients were clear, the clinic’s overall volume stagnated in the early stages. There simply was not enough awareness throughout the hospital regarding the IR service and its role in the hospital network.

In response, Vatakencherry designed presentations tailored to specialty fields — such as internal medicine, nephrology, GI, and OB/GYN — to educate physicians about how referring patients to a clinical IR practitioner could enhance overall care. The presentations were usually held at grand rounds, department meetings, or at multidisciplinary conferences.

Vatakencherry also gave the specialists his cell phone number and invited them to call with questions regarding when to refer to interventional radiology or about specific patients. As a result of this outreach, the emerging clinic’s volume started to grow.

Over the next two years, with his non-procedural clinical responsibilities increasing, Vatakencherry recruited a second interventional radiologist to join the clinic, and the two physicians increased their clinical care duties to a half-day once a week.

As the IR referral numbers continued to climb, Vatakencherry and his IR colleagues created a business plan for a dedicated outpatient clinic space, with additional IR physicians as well as office staff. The IRs made the case that the scope, breadth, and complexity of diseases and procedures that the IR physicians were performing require clinical consultation and longitudinal follow up.

Vatakencherry and his team presented the business plan to hospital administrators, who responded by approving additional support staff. The expanded team included nurse case managers, additional schedulers, outpatient office staff, and additional physicians, as well as physician extenders to keep up with the growing demand for comprehensive IR care in the hospital network.

Initially, the IR physicians had to do much of this nonprocedural clinic work on top of imaging and procedural responsibilities. In a volume-based radiology paradigm, there’s often a large financial and opportunity cost to doing more than just reading imaging studies.

“You may be seen by the radiology group or hospital as not being productive, even though you are working more hours,” Vatakencherry explains. “You basically have to do all the imaging work and the clinical work on top of it to showcase the importance of the interventional radiologists.”

All that hard work has paid off for Vatakencherry and his colleagues, who have built a thriving clinical IR practice and have received the respect of their clinical counterparts. IR is now considered a clinical practice at Kaiser, not only on paper, but through physician presence on the hospital floor and in the outpatient clinic. Ten to 15 years ago, specialists did not expect to see IRs at the patient bedside. Today, they are a regular presence on the floor.

In all, the Kaiser Permanente Los Angeles IR department has two physician extenders and nine IRs (seven peripheral interventionalists and two neuro interventionalists) who spend between one and two days each on nonprocedural clinical activities, including dedicated outpatient clinic hours and dedicated inpatient consult hours. Vatakencherry feels it is crucial for the IR physicians to have dedicated time, during which their sole responsibility is seeing patients and not reading scans or performing procedures.

As of 2009, Kaiser required that all inpatient invasive procedures have consultation, so that every patient is seen before intervention. That process has since evolved, and now the department seeks to have one doctor between 8 a.m. and 5 p.m. providing face-to-face inpatient consults and conducting follow-ups with patients. This approach positions the IRs as invaluable members of the hospital system.

“The more we act like surgeons in our day-to-day existence, the more we’re understood and respected by the hospital administration and will receive adequate resources and infrastructure required to run a successful comprehensive, longitudinal clinical practice,” Vatakencherry says. 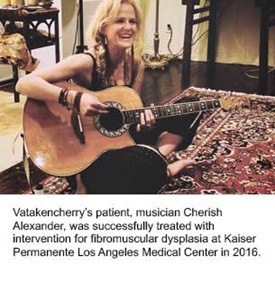 The new era of IR adheres to the principal that interventional radiologists, as true disease managers, should not only consult with patients before and after procedures, but throughout their lives.

“There is a great deal of overlap in the number of specialists who can also provide the procedural care that IRs have traditionally performed, so how do you distinguish yourself from other specialists?” Vatakencherry asks. “What differentiates you? How are you going to provide the quality care that will allow you to get those referrals and take care of patients?” The answer is simple, he says: Invest your time to have global knowledge of the diseases you treat and provide both clinical expertise as well as compassion to guide patients through their illness longitudinally.

Vatakencherry admits that to fully own disease management, he had to revisit clinical fundamentals like epidemiology, pharmacology, microbiology, and physiology, because they weren’t taught during his IR specialty training. He also notes that, as IRs treat more cancer patients, they need to be better trained in having difficult conversations, such as end-of-life issues. “We have to recruit physicians who see taking care of patients as their primary role. Individually, we need to treat each patient like a family member.”

Alexander has experienced that kind of caring treatment first-hand and now considers Vatakencherry not only a doctor, but a personal friend. In fact, she beams when she relates that she has given Vatakencherry a copy of her latest CD, and that her husband, a fine artist, has gifted him a painting entitled “April Showers” after her April 2016 surgery. “He just wants to help patients and loves what he does. Now, he’s part of our family,” Alexander says.

Want to join the discussion about how interventional radiologists treat the whole patient longitudinally in one clinical IR practice? Let us know your thoughts on Twitter at #imaging3.

Have a case study idea you’d like to share with the radiology community? Please submit your idea to http://bit.ly/CaseStudyForm.