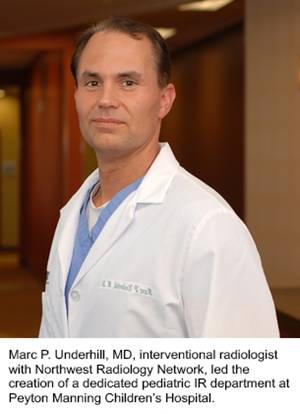 Young patients have access to more than 40 pediatric services and subspecialties at Peyton Manning Children’s Hospital (PMCH), part of St. Vincent Hospital and Health System in Indianapolis. But before 2016, when children required interventional radiology (IR) procedures as basic as feeding tube replacements, a dedicated pediatric IR department wasn’t available to treat them.

Sometimes, these children went to St. Vincent’s adult vascular lab — which the hospital system shares with Northwest Radiology Network (NWR), the private practice that provides the system’s diagnostic radiology services. Unfortunately, though, the lab wasn’t equipped with the dedicated time or resources for specialized pediatric care.

“Without a dedicated workflow for all the kids we saw, the adult lab just worked kids in as it could,” says Marc P. Underhill, MD, an interventional radiologist at NWR. “Pediatric IR is different than dealing with adults: You’re not just treating the patient, you’re also treating the parents. Reviewing treatment plans with both the patients and parents requires more time and flexibility than the adult lab can consistently provide.”

As the children’s hospital grew and the volume of pediatric IR cases increased, this bottleneck became more evident. “We were seeing more frequent and complex pediatric patients than the adult IR providers were comfortable treating,” says Richard K. Freeman, MD, MBA, system chief medical officer at St. Vincent. “As a result, some pediatric IR patients were being delayed or transferred out of our facility.”

For Underhill, who was studying business and leadership through the ACR’s Radiology Leadership Institute (RLI)  at the time, the solution was obvious: Create a dedicated pediatric IR department to improve the patient experience and keep kids from having to seek care elsewhere.

Presenting to the Board

In December of 2015, Underhill presented his vision to his group’s board of directors — which initially responded with “nice smiles and a bit of skepticism,” he says. They understood the hospital’s need for this service and recognized Underhill’s passion for pediatric care, but had plenty of questions about the time, cost, and resources required.

“One concern that always arises in any private practice model like our group is, what are the costs associated with providing this service?” says Matthew M. Jones, MD, a pediatric radiologist at NWR. “Other concerns include: How much dedicated time is this going to take? Is there a set of procedures and patients to start caring for immediately, or will it take a while to ramp up? And how will the group budget its time and payroll to make it worthwhile?”

Collaboration was the answer to many of these questions.

W. Kent Hansen, MD, PhD, president and chief executive officer of NWR, says, “We couldn’t promise Marc the dedicated time to do only pediatric interventional services. He had to be willing to sacrifice his time to grow the pediatric department while continuing to provide adult care — and the group had to make sacrifices, too, to help him out. It was critical for him to build relationships and buy-in from the rest of the group and from the hospital, because he needed their support.”

In the weeks after the board meeting, Underhill focused on building buy-in and support throughout his practice and the hospital. 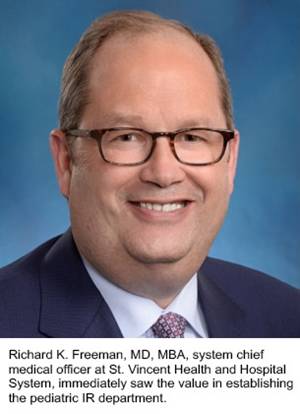 Underhill had been casually bouncing the idea of a dedicated pediatric IR department off other clinicians for years. Now, he began asking more pointed questions to understand how often pediatric physicians would use dedicated IR services and to assess how he would manage their patients.

“While the initial goal of these conversations was to gain support, they actually informed how we structured the service line,” Underhill says. “They helped us develop a business plan for standardized care and determine how we would schedule patients, how we would process imaging orders, and who should perform and manage which IR services.”

Underhill credits the RLI, a professional training program specifically designed for radiologists, with teaching him the business savvy necessary to turn these conversations into a business plan.

“Five years ago, I had no idea how to write up a business plan or how to present that plan to different groups to get buy-in,” says Underhill, who wrote his RLI practicum report about launching this pediatric IR service. “The RLI provided me with the skills I needed to turn my vision into reality.”

After receiving strong approval from hospital providers, Underhill secured a meeting with St. Vincent’s chief medical officer. He presented a list of physician-requested IR services that the new department could offer and laid out a proposal for delivering, expanding, and improving those services to increase referrals over time.

“Dr. Underhill had carefully thought through the problem and the potential solution and had gathered support within his group and among his peers,” says Freeman, who immediately saw the value in filling this care gap. “People often bring problems to me, but rarely do they present such a well-thought-out solution.”

With the support of his practice and St. Vincent Hospital, Underhill opened a dedicated pediatric IR department in shared space within PMCH’s radiology department in January of 2016.

To achieve his objective of improving the pediatric patient experience, Underhill built the dedicated expertise and processes to treat children more effectively than the adult vascular lab.

His initial goal was to acquire at least 80 percent of the hospital’s pediatric IR cases in the first year. He thought this was a realistic number since referring physicians would have to get used to sending him their pediatric patients.

“Referring physicians had always ordered these procedures in the adult vascular lab, so I knew there’d be a tendency to keep sending patients there,” Underhill says. “But I was surprised by how quickly referring providers adjusted to the change.”

Underhill attributes the successful launch of this pediatric service line in part to his accessibility. He meets referring physicians and their patients where they are — whether on another floor or even in another St. Vincent hospital. 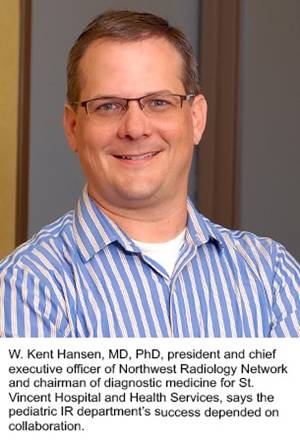 “I have made myself as portable as possible and tried to perform cases either in the patient’s room, when appropriate, or at least in their hospital,” Underhill wrote in his RLI practicum report. “This has included performing cases in tandem with other physicians in the operating room, so a child could be put under anesthesia once and have a series of procedures done.”

Because many of the procedures Underhill performs are ultrasound-guided, he can often treat patients at their bedsides. This not only improves the patient experience, but it also reduced the administrative burden of establishing the department, because Underhill didn’t require dedicated space to get started.

“Pediatric surgeons would call me and say, ‘Do you have five minutes to visit this patient?’ So I’d run up to their clinic and see the patient,” Underhill says. “That saves the patient time, streamlining things for a more collegial, team-based approach. It’s a more positive experience for the patients, their parents, and the referring physicians.”

In his report, Underhill wrote that the ACR Imaging 3.0 initiative inspired his efforts:

“A strong lesson learned, especially in the hospital setting, comes directly from ACR Imaging 3.0. That is: Get out of the reading room. Performing a procedure at the bedside when it is safe to do so not only helps nursing out, but also gives you invaluable face time on the floor,” Underhill wrote. “Let the physicians see you are a physician like them. Round on your patients, take an interest in who they are and what they want. Working with your patients will always result in better outcomes, and being seen on the floors and in clinics as part of the treatment team buys collegiality and support if times ever get tough.”

This method has established Underhill as a vital part of the care team. “Our pediatric providers overwhelmingly support this approach,” Freeman says. “We have seen a higher quality of care and the elimination of patients being delayed or transferred for procedures as a result.”

Two years into its existence, the pediatric IR department now sees as many as seven patients a day. The most common procedures include feeding tube changes, biopsies, abscess drains, and an increasing number of sclerotherapy cases. (Read more about the department’s sclerotherapy services in this Imaging 3.0 vignette.)

While most ultrasound-guided procedures are done at the patient’s bedside, Underhill also has access to a couple of clinic rooms in the radiology department and even a couple of operating rooms. 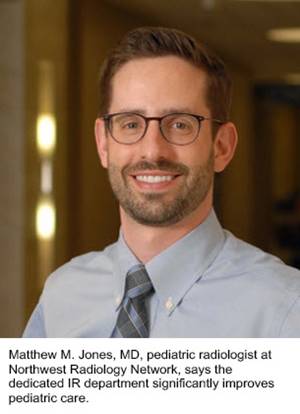 Additionally, Underhill is building a larger inventory of kid-sized supplies, including smaller feeding tubes, catheters, and IV access devices. The department also has its own CT fluoroscopy scanner and access to ultrasound equipment.

Underhill continues to meet with hospital executives to plan the department’s growth. The next step, he says, is to formalize a process for ordering supplies and to create a dedicated pediatric IR suite for more complex procedures. Eventually, the department may hire additional providers to support him.

“Having another dedicated person here in the near future would be wonderful, but we don’t have enough pediatric business yet for a full-time employee,” says Underhill, who splits his time 50/50 between pediatric IR and adult biopsies. “The goal is to slowly grow to the point we need to hire someone else to do biopsies, so I can focus exclusively on pediatrics.”

The most valuable lesson Underhill learned in establishing the department was that, to succeed, he had to train other radiologists to cover some of his procedures, such as feeding tube maintenance, allowing him to focus on growing the department without burning out.

“Make sure other people can do your job,” says Underhill, who now serves on the board of NWR and as president-elect of the Indiana Radiological Society. “You really need help from other groups to cover you so that you can grow.”

Hansen agrees: “Being a department of one is difficult; you have to understand that it requires a team approach — from both the hospital and the radiology group. It’s critical to achieving and maintaining continuity of care.”