Interventional radiologists and surgeons establish a hybrid OR for collaborative, image-guided surgery at Cincinnati Children’s Hospital Medical Center.
Get a PDF version of this Case Study
Download 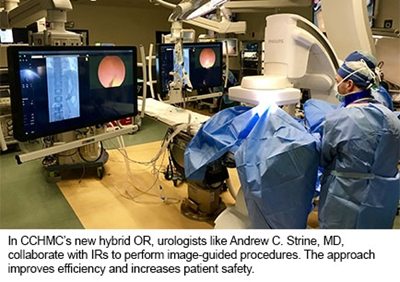 The newly opened hybrid operating room (OR) at Cincinnati Children’s Hospital Medical Center (CCHMC) is the result of a collaboration between the hospital’s interventional radiologists (IRs) and surgeons. Equipped with innovative technology, the hybrid OR is helping the two disciplines overcome the proverbial “turf war” to deliver integrated care.

John M. Racadio, MD, director of interventional radiology innovation and research at CCHMC, and Daniel von Allmen, MD, surgeon-in-chief and Lester W. Martin Chair of Pediatric Surgery at CCHMC, led development of the hybrid OR — a pediatric facility that serves all subspecialties, including ENT, urology, and adolescent gynecology.

“The collaborative approach our IRs and surgeons are taking to jointly care for our patients is unique,” von Allmen says. “We’re breaking down silos by bringing imaging and surgical expertise together into the same room. It’s already proving to be an effective model for providing better care and unlocking new possibilities that haven’t been considered before.”

CCHMC’s IRs and surgeons began building the foundation for the hybrid OR in 2002. That’s when IR moved its procedure rooms from the main radiology department to the surgery suite in an effort to provide more coordinated care. But proximity didn’t automatically spark collaboration.

“When we initially moved to the OR area, quite honestly, we felt like the black sheep of the perioperative services,” Racadio says. “For the first year or so, we kept doing our own thing until we could figure out how to support the surgical team. Education, communication, and visibility were keys to integrating the two divisions over time.”

The IRs fostered this integration by participating in periop management committees and speaking at surgery faculty meetings to describe how they could help their colleagues improve patient care. They also began making more efficient use of the existing manpower when they started relying on the OR’s anesthesia team for sedation and general anesthesia, and the OR nurses began assisting with IR cases.

To encourage further collaboration, Racadio often stopped surgeons in the hallway between the two departments and showed them images from radiology-guided procedures, highlighting opportunities to work together. Eventually, the surgeons started calling IR for assistance during procedures, but usually only when they got stuck and needed help.

“Many times, if the surgeon would have called us sooner, we could have provided image guidance from the start, rather than as an afterthought,” Racadio says. “We knew that if we could find a way to truly collaborate, we could make surgery more efficient and precise.” 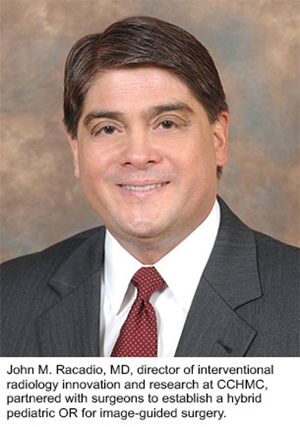 When von Allmen joined the CCHMC staff as division director of pediatric surgery in 2009, he shared Racadio’s interest in image guidance. Together, they brainstormed ways to combine their specialties.

Fortunately, the culture at CCHMC was already poised for collaboration. In fact, von Allmen says that when he was hired, the hospital emphasized its mission to provide patient-centered care by working across divisions and departments. “Collaboration is part of the culture here,” he says. “It doesn’t help if we’re ‘more successful’ than the IRs. We really need full collaboration to provide the best patient care.”

While the surgeons eventually grew accustomed to calling IR physicians for assistance, it was difficult for the teams to truly work together without a room that could serve both specialties simultaneously. To further their collaboration, von Allmen and Racadio knew they needed an OR specifically designed to combine both teams’ expertise.

When he applied for the position of surgeon-in-chief, von Allmen presented this vision to hospital administrators. His appointment to that role in July of 2015 marked the first concrete step toward creating the hybrid OR.

From there, von Allmen formally proposed the idea to the hospital’s capital committee, explaining how, through coordination and advanced technology, the hybrid OR would enhance patient care.

“I specifically told them, ‘I can’t give you a list of procedures that will make this room pay for itself in the next five years. But I am convinced that this is a better way to care for patients,’” he says. Ultimately, von Allmen won the committee’s approval by looking beyond the bottom line to focus on the “return on mission (ROM).”

“An opportunity certainly existed for long-term return on investment (ROI), and although that’s important, that did not drive our decision. We value ROM just as much as ROI,” says Kevin Gessner, vice president of operations, surgical services at CCHMC. “If something supports our vision to be the leader in improving child health, the ROI usually follows. We were willing to make that bet, knowing this hybrid OR would help us improve patient care.”

Still, some surgeons and IRs worried that combining services would mean relinquishing control to the other team. Racadio and von Allmen assured everyone that collaboration was not a threat but an opportunity to give patients the best of both worlds. “Turf wars happen between surgery and radiology when you assume you’re vying for a single piece of pie,” Racadio says. “But what we’re trying to do is create a bigger pie: We want to treat patients better, and if we do that, we’ll draw more patients with our integrated approach.”

Establishing such a progressive program required research. To learn best practices for setting up the OR and structuring the workflow, Racadio and leaders from both departments visited other hybrid ORs across the country — mostly adult ORs focused on a single specialty, such as vascular or neurosurgery.

The biggest challenge was finding space to accommodate multiple teams and additional equipment. “Figuring out where to put it was more difficult than actually getting approval,” says von Allmen, who had to go through several more committees to secure hospital real estate. “We were able to identify space adjacent to the OR, where we could convert some storage space.”

Construction began in October of 2017 in preparation for the OR’s February 2018 opening. The IR team incorporated cutting-edge equipment into the facility, including a fixed C-arm system and cone beam CT with 2-D and 3-D navigation — technologies it obtained through a vendor partnership and initially tested in its non-clinical research lab. “We built the hybrid OR to mirror our research lab, so we could immediately translate innovations from the lab into a clinical setting using the same equipment,” Racadio says. 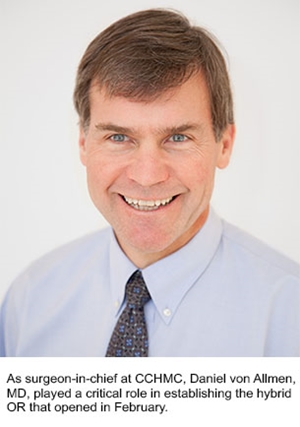 As the plans for the hybrid OR came together, Racadio observed procedures to better understand how IR could enhance care. Now, as part of a new secondary faculty appointment in the department of surgery, Racadio plans to shadow surgeons one day per week to identify more opportunities for collaboration.

“Our departments have been separate for so long that we don’t even know what we could offer each other,” von Allmen says. “The first phase of the image-guided surgery program is to continue to identify procedures that we can collaborate on for improved safety and outcomes.”

As part of these efforts, Racadio and the image-guided surgery program manager, Nicole Hilvert, RT(R)(VI), have been training the surgeons about IR’s capabilities in the new hybrid OR. The mandatory sessions include an hour-long presentation and an hour-long demonstration of the hybrid equipment. “The goal is to give the surgeons a baseline understanding of what the technology can do — and to reinforce the vision of collaboration to bring more image-guidance to the OR,” Racadio says.

The interactive training is helping the team identify new use cases for the hybrid OR, including spine surgery, percu-taneous nephrolithotomy, intraoperative angioembolization, and C-arm cone beam CT-guided localization of pulmonary nodules for thoracoscopic resection.

“As general surgeons, we are trained to think we can do everything on our own,” von Allmen says. “But nothing is more liberating than having somebody else bring their expertise to part of a procedure, so I can focus on the parts where I have expertise. It just requires giving up a little control and being willing to recognize that different skillsets offer benefits to the patient.”

CCHMC is already seeing positive results from the hybrid OR, which can accommodate an average of three cases per day — although more complicated procedures can take 10 hours or more. “In many of the cases we’ve done so far, we can point out direct improvements in care that occurred because of this space and collaboration,” von Allmen says.

For example, procedures like kidney stone removal used to involve transporting patients back and forth between surgery and radiology multiple times, including after the procedures, when patients often had to return for follow-up CT scans and, possibly, follow-up surgeries.

But in the hybrid OR, the surgical table is made of X-ray friendly carbon fiber, so an IR and urologist can perform the procedure and acquire imaging all in one room. This significantly decreases anesthesia time, while increasing patient safety and improving overall efficiency. “We can address everything at the same time, during a single procedure,” Racadio says. “We’re delivering better care together than we ever did separately.”

As the surgeons and IRs collaborate on more procedures, the advantages of the OR are expected to become increasingly evident.
“Ultimately, our measure of success will be the outcomes we achieve for our patients and their families,” Gessner says. “If you truly keep your patients’ interests first, you’ll think differently about collaborations and unlock new opportunities to improve care.”

Combining Insight and Incision by American College of Radiology is licensed under a Creative Commons Attribution Noncommercial No Derivatives 4.0 International License. Based on a work at www.acr.org/imaging3. Permissions beyond the scope of this license may be available at www.acr.org/Legal.