Since 1978, one interventional radiologist has been providing longitudinal care — and building a clinical IR practice — for patients at Massachusetts General Hospital. 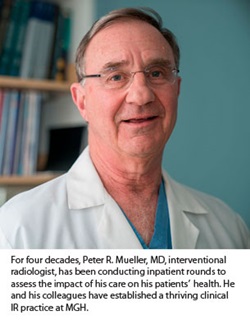 When Quintin Smith checked into Massachusetts General Hospital (MGH) for a “simple” appendectomy, he had no idea that the planned 26-minute laparoscopic surgery would turn into a nearly month-long stay in the hospital, including a week spent in the ICU.

In December 2014, Smith underwent surgery, spent a night in the hospital, and went home. Rather than subsiding, the pain in his abdomen grew increasingly worse, and Smith quickly realized something was seriously wrong. He presented back to the hospital with what turned out to be numerous abdominal abscesses.

Initially Mueller installed a single drain for the fluid; ultimately, Smith had as many as six tubes in his abdomen. “The entire time I was in the hospital, Dr. Mueller came by to check on my progress and have a bit of a chat,” he says. “As a patient, it made a big difference to me to have a doctor so invested in my case. By being directly involved, he knew the best pathway for my care, which ultimately prevented me from having surgery. It was almost like having a PCP in MGH.”

Smith’s story is an example of true longitudinal care provided by Mueller and the MGH IR team in collaboration with his surgeon, Peter Fagenholz, MD. During his lengthy and complicated stay in the hospital, Smith enjoyed watching the two physicians working closely together to optimize his care.

“The ‘Peter and Peter duo’ made me feel part of a community in the hospital,” says Smith. “They clearly trust, respect, and like each other, which gave me confidence that I was in good hands.”

In the era of value-based medicine, many IRs and radiologists are now beginning to embrace the concepts of patient-facing care. But for Mueller, who is chief of interventional radiology at MGH, this approach to medicine has been 40 years in the making.

“I’ve been practicing clinical care since 1978,” Mueller says. “I’ve always wanted to know how my results were received. I felt it necessary, even in my hand-written notes days, to see patients and glean more about their status and outcomes. That was back when radiology wasn’t typically doing this kind of thing, but it was natural for me because I wanted to see if what we did made a difference.”

In the early days, Mueller collaborated on patient rounds with a surgeon colleague. “He knew I cared about patients, and I would usually not go home at the end of the day until we had reviewed films of his patients and then stopped in to consult with each one.”

Over time, Mueller became continually more active in clinical care. “It took us a while to get buy-in from hospital administration and other health care providers about IR physicians being involved in longitudinal patient care,” he says. “We didn’t charge for this service until we built a viable, patient-facing practice.”

Today, there’s a cadre of people involved in clinical IR care at MGH. Patient rounds typically include Mueller or one of the other IR doctors, plus either a physician assistant or nurse practitioner and, often, a fellow or resident. At a large hospital like MGH, there can be upwards of 40 or 50 patients on the IR service during any given period, with the team visiting acute patients every day.”

For Fagenholz and his colleagues at MGH, the concept of IR physicians practicing longitudinal patient care is not new. “In other hospitals, it may be rare for an interventional radiologist to make rounds on patients, but it’s not rare here. That’s how Peter Mueller’s been operating since I came here as a resident in 2002, and I’m certain that’s how he’s operated his entire life,” he says. “It’s the difference between just being a proceduralist and being a doctor. Peter is a doctor — and a really good one.”

Fagenholz adds that, for many of the surgical staff, Mueller is one of the first people they meet when joining MGH. “When you’re midway through your surgical internship, you may not know half the people in your own department, because you haven’t rotated onto every service, but you definitely know the interventional radiologist.”

For Mueller, one of the most important factors in providing comprehensive patient care is that the interventionalist knows the patient and the patient knows the interventionalist. “Patients get to know who you are as a physician,” he says. “That’s particularly important for inpatients, because there are so many people coming at them in the hospital,” he says. “It generates trust that you are their caretaker. Interventional radiology isn’t well-known to the public, but patients come to know us as doctors, just like the surgeons caring for them. It makes them feel comfortable.” 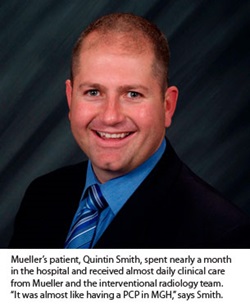 Rounding on patients also generates trust in the specialty by other physicians who are part of the patient care team. Says Fagenholz, “It’s great to have a collaborator who is also following what’s going on with patients. Together, we’re evaluating decisions such as whether something should be treated radiologically or with surgery, how to approach it, how long to persist, and when drains can come out. When you’re not sure, it’s good to have somebody whose opinion you trust.”

According to Fagenholz, it’s not just a matter of determining whether or not a procedure is technically feasible, it’s about having a knowledgeable partner to weigh what’s best for the patient. “With Dr. Mueller being so close to patient care, he can actually help make decisions,” says Fagenholz. “To have the best perspective, you have to see patients and how they respond to their procedures — a day later, a week later, a month later, a year later. It’s the only way to know if you are making a difference.”

The clinical approach is important in establishing interventionalists as true clinicians, as they are heavily involved in patient care decisions. “Longitudinal care has several benefits,” says Mueller. “One is that other providers in the hospital see you as a physician, and they appreciate that radiologists can actually be clinicians. If they don’t see you in person, they don’t always know what you do or that you actually are a patient caretaker. So, that’s a tremendous benefit for the IR department.”

He adds that another advantage of clinical practice is that the IR physician can direct patient care rather than passively reacting to events. “To me, it’s embarrassing to have somebody else notify me that something’s going on with my patient, and I’m not aware of it. I’d much rather be the one to go to the physician in charge and let them know what we need to do to get the patient better. Over time, it garners respect for you as a physician who cares for patients,” he says.

Fagenholz agrees: “Dr. Mueller is somebody I look up to, because he’s set the ethos for patient care in the IR group. We are collaborators. It’s not just my patient, it’s our patient. As clinicians, the interventionalists are totally invested in the outcome and how to get there.”

In fact, Mueller is so well respected by his peers and patients at MGH that he was honored with an award for clinical excellence in 2014 — a first for a radiologist. Mueller was acknowledged for his willingness to help, collegiality, and joy of practice. “He is widely recognized throughout MGH for his unwavering willingness to help with the most difficult cases,” says surgeon Janey Pratt, MD. “His collegiality is legendary and refreshing in the face of the time-compressed, high-pressure world in which we live and practice.”

Mueller believes strongly that the continuity of care provided by interventionalists results in better outcomes for patients. “Radiologists are getting better at outpatient consultation, but there’s not been enough clinical care, particularly within the hospital setting,” he says. “It’s important that we become known as doctors, where we consult with patients, treat them, then follow them and bring them back to the clinic for consultation.”

Smith is a prime example of the impact longitudinal care can have on patients. Nearly two years after his hospital stay and treatment were completed, he experienced a recurrence of the fluid collection in his abdomen. He immediately called for an appointment with Mueller.

“Dr. Mueller is my doctor. I’m sure there are many great interventional radiologists at MGH, but I wanted to see Dr. Mueller,” he emphasizes. “By following up with me and getting to know me, by being involved directly in my case, he is the best person to provide the care that I need.”