A thriving interventional radiology clinical practice takes ownership of patient care and communicates the specialty’s critical role.
Get a PDF version of this Case Study
Download 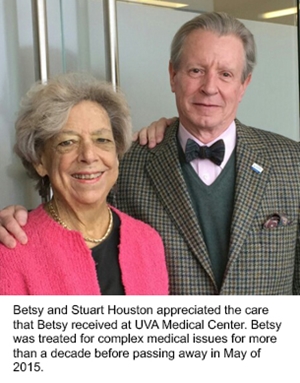 On Feb. 4, 2004, Betsy Houston presented at her local hospital in Lexington, Virginia, with massive hematemesis. Doctors gave Houston 40 units of blood, but that didn’t seem to matter — they couldn’t identify the source of the bleeding to stop it. “No one thought she’d live through the night,” recalls Houston’s husband, Stuart.

Unable to help further, the local care team ordered a flight to medevac Betsy to the University of Virginia (UVA) Medical Center in Charlottesville, Virginia. There, a multispecialty team, including radiologists, determined that her bleeding stemmed from portal hypertension from previously undiagnosed liver disease.

The source of the bleeding identified, John “Fritz” Angle, MD, professor of radiology and medical imaging and division director of vascular and interventional radiology (IR) at UVA, emergently placed a transjugular intrahepatic portosystemic shunt into Betsy’s liver — saving her life.

For the next decade, Angle monitored and managed Betsy’s complex medical condition in collaboration with UVA’s gastroenterologists. All the while, the multidisciplinary team included the Houstons in every treatment decision.

Betsy ultimately succumbed to progressive liver disease in May of 2015. “We all knew that death was a possibility,” Stuart says. “I sure miss her. But I got 11 years with her that I didn’t think I’d have, and the interventional radiology department was a major player in those 11 years.”

This patient-centered approach was also vital to Maureen Womack, RN, of Chesapeake, Virginia, who receives IR care at the UVA Health System for ongoing management of fibromuscular dysplasia. She affirms an unparalleled provision of care due to transparency and treatment of her “whole person.”

Alan H. Matsumoto, MD, chair and Theodore E. Keats professor of radiology in the department of radiology and medical imaging at the UVA Health System, is her IR physician. “He always explains every single scan and procedure in depth and at a level my husband and I can understand. This type of communication helped to diffuse my fear, and enabled me to go on with life,” she says.

UVA’s interventional radiologists (IRs) began establishing a patient-facing, multidisciplinary care model in the late 1990s to manage complex diseases and treat the entire person. Since then, they have spent over two decades building the visibility and credibility of IR into a thriving, patient-oriented practice — one that imparts guiding principles to the next generation of IRs. “We feel comfortable taking care of patients and believe we have real responsibility for and accountability to the care of patients,” says Matsumoto. “We’ve always wanted them to see us as their physicians.”

To that end, Matsumoto and Angle worked tirelessly in those early years to demonstrate the visibility of IR in the hospital setting and build a stron and cohesive clinical service. They consulted with patients in the prep and recovery area of the procedure suite and provided clinical notes in patient charts, adding complementary and timely information to the admitting specialty’s notes. Their input provided not only relevant case details, but also illustrated the breadth of expertise and value the IRs bring to patient care.

Such efforts did not go unnoticed. In fact, several members of the IR team received the UVA School of Medicine’s Dean’s Clinical Excellence Award the first five years the model was implemented, bolstering the specialty’s clinical reputation in Virginia and beyond.

By 1998, hospital administrators had taken notice of the awards and interventional radiology’s presence on the care team. Impressed with the efforts, administrators agreed to support the cost of transforming a small waiting room into a clinic for IR outpatients. But the IRs didn’t have a receptionist, clinic nurses, interns, or residents to support the clinic. Eventually, they spent their own money to hire a nurse practitioner.

Despite the staffing challenges, the IRs pressed on. “All of us saw this outpatient clinic as a ‘must-do’ situation,” Angle explains. “The ability to provide ongoing clinical care, even for non-hospitalized patients, is where IR needed to go. The clinic was not only an opportunity, but a responsibility we had to our patients.”

The IRs took several steps to ensure the clinic’s success. Among them, they made a concerted effort to actively participate in tumor boards and collaborate with other specialties to optimize treatment plans. “If you’re going to build a practice, you can’t be a wallflower at tumor boards,” explains Angle, noting the importance of understanding the anatomy, pathophysiology, and natural history of the disease from both the IR perspective and the perspectives of others in the meetings.

After opening the clinic, the IRs focused on growing the practice and conveying a message to hospital administrators that IRs, like cardiologists and gastroenterologists, need robust infrastructure to provide meaningful longitudinal care. In making their case, the IRs emphasized the positive outcomes that IR brings, especially for trauma, transplant, dialysis, oncology, and vascular disease patients. 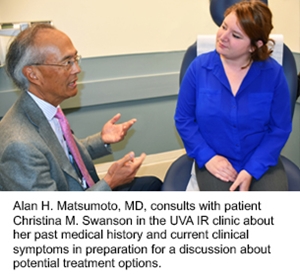 Matsumoto also established credibility in part by demonstrating IR’s impact as a contributor to positive business margins and its role in providing the immediacy of care required of a hospital that is both a level 1 trauma and transplant center.

Additionally, he noted that when compared to the 21 other clinical departments in the hospital, IR is the fifth largest referrer for outpatient imaging studies — a metric that got administrators’ attention. “When asking for resources, it’s important to explain the business IR brings to the table and the return on investment (ROI) it provides,” Matsumoto advises.

Jim Amato, then radiology administrator and now chief of clinical ancillary services at UVA Medical Center, admits that he didn’t initially appreciate that the IR clinic needed resources and support, just like any other clinic, but the data the IRs presented, including number of clinical visits, staffing-to-demand ratios, and outcomes measurements, convinced him. “When viewed through that lens, it’s clear that the IR clinic really should be seen as an ambulatory operation, not just an appendage of a radiology suite,” he says.

In 1999, as UVA began planning a hospital expansion primarily for cardiology and the operative suites, Matsumoto, along with his cardiology and surgical colleagues, convinced administrators to include IR in the discussions for clinical space. Once approved, he and Angle spent four years designing plans and mapping out every square foot of what became their clinical home in 2006.

Between 1997 and 2006, they increased the number of physician extenders from one to six, and the nursing staff grew from two to 13 staff members. “This took ongoing continuous negotiation with administrators to demonstrate not only our growth but also the ROI in our services,” Matsumoto explains.

Today, UVA’s IR team performs about 15,000 procedures on more than 6,000 patients annually and sees 2,500 outpatients in the clinic each year, a volume that continues to increase. The IRs treat a wide range of conditions, including vascular and nonvascular diseases, and have a separate and very active interventional neuroradiology outpatient clinic.

“Having a wide breadth of less-invasive procedures available to our patient population, with access to all our subspecialty physicians, has been critical to our success as an institution,” Amato says. “Our patient satisfaction in IR is extremely high because the patient has an early and ongoing relationship with our IR physicians pre-procedure, during the procedure, and then post-procedure and beyond.”

Preparing the Next Generation

Sometimes, though, the IRs have the greatest impact when they don’t perform a procedure at all. “We impart our clinical judgement about improving the patient’s health versus being solely a proceduralist,” Matsumoto says. “To just complete a procedure because it’s requested makes you a passive participant and glorified technician rather than an integral part of the care delivery decision process. We want to use our expertise to help drive care decisions.”

It’s an approach UVA’s IRs strive to impart on their trainees. “The university setting is unique because we’re training the next generation of IRs, instilling in them the belief that they’re accountable to and responsible for not only the acute but also the longitudinal care of their patients,” Matsumoto says. “We teach them that if you leave the hospital early instead of seeing your patients, you’re deferring to the other services as being the primary manager of those patients.”

Trainees are fully immersed in this philosophy as part of the Vascular and IR (VIR) clinical pathway that UVA implemented in 2001. Medical students are directly matched into the six-year pathway, just like all other residencies. Angle engineered the curriculum to ensure that VIR residents receive dedicated clinical experience during their residency.

“When the VIR clinical pathway was implemented, it was our belief that the next generation of IRs would now have the opportunity to experience formal clinical training beyond an internship year so they would actually feel much more comfortable admitting and taking care of patients both acutely and longitudinally,” Matsumoto explains.

Taking ownership of patients in this way means assuming responsibility for them in their most vulnerable states. “I am fortunate enough to have access to a doctor who has saved my life,” Womack says. “Dr. Matsumoto is just of a different class of physician, not just in his technical skills, but in the compassion he has shown me.”

Knowing that UVA’s IRs are committed to preserving and advancing this patient-centered approach means a lot to patients and families. Stuart believes this approach was central to those extra years he got with his wife, Betsy.

“We had the very best hands-on care that anyone could ever have,” says Stuart, who is so thankful for the care his wife received that he has established grants and programs in her honor to further research and education at UVA. “Dr. Angle was there with me and Betsy whenever we needed him,” he says. “It made all the difference.”