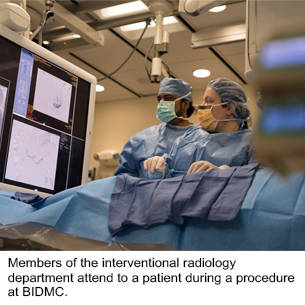 For the past several years, interventional radiology (IR) has been the fastest-growing division of the radiology department at Beth Israel Deaconess Medical Center (BIDMC), a tertiary medical center in Boston. In fact, by 2014, inpatient treatment requests for IR services at BIDMC had increased so much that the division’s standard operating hours were no longer sufficient.

At the time, the IRs worked from 8 a.m. to 5:30 p.m. weekdays, with weekend coverage limited to urgent cases. As referring providers made their morning rounds and then submitted mid-day IR requests for IR consults and procedures, the backlog of patients often grew, and the team routinely fell behind.

To try to keep up, the IRs regularly worked into the evening, and the on-call teams did what they could to help with non-urgent cases. Despite these efforts, an average of three IR cases rolled over each weekday night and eight weekend cases were pushed to the following Monday, meaning some patients had an extended stay in the hospital.

With patient care delayed, patients and families started to complain, and referring providers and nurses grew frustrated, too, says Muneeb Ahmed, MD, FSIR, chief of vascular and interventional radiology and vice chair for interventional services at BIDMC. “This peak-and-valley approach to our care delivery process was challenging,” he says. “Patients were forced to wait for services that might have allowed them to be discharged sooner or to advance the course of their overall care.”

Ahmed and his team knew they had to do something to address the problem. They considered tackling the backlog by adding another angiography suite, but space limitations made that an impractical option. Instead, Ahmed approached hospital administrators about adding additional IR staff and altering the team’s hours, extending weekday coverage to 9 p.m. and adding regular weekend shifts from 8 a.m. to 4 p.m. for non-urgent cases.

Since launching the expanded coverage initiative in 2016, the IR department has performed more than 450 procedures over weekends. Previously, these patients would have been forced to wait until the following week for treatment. Including weeknight service, it is estimated that more than 1,200 patients have received faster care with the additional IR coverage, resulting in earlier discharge, more efficient progression of care, and fewer hospital admissions of patients presenting to the emergency department.

To institute the extended hours and reach this level of efficiency, Ahmed developed a plan in late 2014. He presented the plan during multiple staff meetings to get the IR team on board with the new schedule. Initially, some IRs, like Ammar Sarwar, MD, assistant professor of radiology at Harvard Medical School, were concerned about how the new hours might impact their workloads. “I wondered, ‘Will we need to be at the hospital more than before?’” Sarwar recalls. 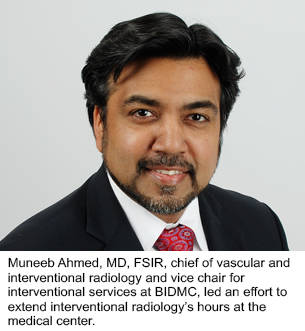 In response to these concerns and to keep existing staff members from burning out, Ahmed proposed hiring additional personnel to help cover the added shifts. He outlined his request for these positions in a business case presentation, which included existing case overflow data and the cost associated with hiring new staff to work with existing team members to cover the extra hours. Ahmed predicted that the team would see four-six cases a day over the weekend, and three cases each weeknight.

To achieve this, the IR administrative team determined that the hospital would need to support the addition of IRs (1.6 FTE), technologists (2.0 FTE), nurses (2.0 FTE), and a nurse practitioner (1.0 FTE). Ahmed says that this plan was designed to maximize the number of cases that the IR physicians could perform by optimizing room turnaround time (using two tech/nurse teams) and using a nurse practitioner to conduct IR consults and prepare patients for procedures.

In return for the hospital’s investment, Ahmed noted that reducing inpatient stays would be more financially viable for the hospital, which is reimbursed based on patient diagnoses — not days admitted. What’s more, he aligned the proposal with BIDMC’s priorities to reduce its high occupancy rates, which at the time were leading to delays in inpatient transfers and patient admissions.

Ahmed presented the proposal to Radiology Chairman Jonathan Kruskal, MD, who then delivered it to BIDMC’s chief executive officer. The hospital approved the plan in late 2015. “Hospital administrators recognized the benefits of this approach immediately and agreed to fund the additional positions we needed to move this forward,” Kruskal says.

One year after implementing the new schedule, Ahmed and his team analyzed patient data from 100 weekends to understand how the new hours were affecting care. They did not include weekday data in the analysis, because too much overlap existed between regular and expanded-hour patients to gauge the impact. The team saw 477 weekend patients over that time period, with 32 of the hospital’s 33 inpatient units utilizing the expanded hours. 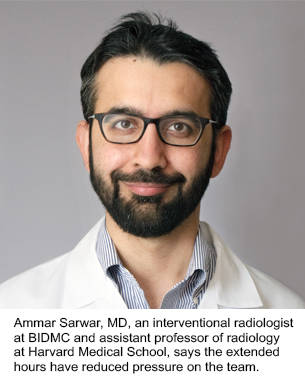 “The fact that almost all of the inpatient units have leveraged the extended hours highlights the impact IR has across the hospital system, which is that we interact with a lot of different patients from different departments,” Ahmed says. “The broad scope of IR makes it particularly well-suited to this type of expansion.”

Through their analysis, Ahmed and his team also found that, as they suspected, the most significant ways the new schedule has benefited BIDMC and its patients is by advancing care, facilitating discharge, and reducing unnecessary emergency department admissions. They calculated that the approach has directly benefited more than 1,200 patients who have received more timely care as a result.

“Reducing the number of days patients spend in the hospital waiting for various steps in their care improves their outcomes and their quality of life,” Ahmed explains. “It also lowers their chances of contracting hospital-acquired infections, while also driving down hospital costs.”

The amount of planning that went into the expansion contributed significantly to its success. The IR team had roughly nine months to hire and train new staff, adjust existing schedules, and head off potential conflicts before instituting the new hours in September of 2016.

For example, Ahmed had to ensure that a separation of duties existed between the team working on cases during the newly expanded hours and the previously established on-call team, which remains available for emergency cases. Early on, there was some question about whether or not the team working the regular shift would help stage an emergency patient while the on-call team was en route to the hospital, he says.

“It took us a couple of months to define the workflow and determine who was responsible when,” Ahmed says, adding that the solution was to set the elective attending physician as the ultimate responsible party in determining whether a case is urgent or emergent and who should handle it.

Another challenge the department faced was developing schedules that the IRs and staff actually wanted to work. To resolve the issue, they assigned existing team members to evening and some weekend hours and assigned new hires to cover the remaining weekend shifts. 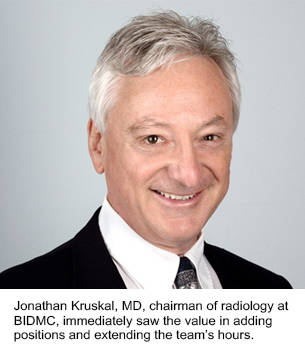 At first, some team members were concerned that they’d be assigned too many weekends, but many have found the weekends to be among the most pleasant shifts — thanks to a focus on relatively routine tasks without a lot of meetings and phone calls. “We are now adjusting the schedule so that everyone who wants to work a weekend shift gets a turn,” Sarwar says.

The team’s flexibility and dedication have been critical to the project, Ahmed says. “One reason we were able to implement this successfully was that everybody was committed to providing the best possible care, and everybody knew that extending our hours would enhance our service,” he says.

Knowing that routine cases will be covered through the evening and on weekends has been a relief for everyone in the department, Sarwar adds. “It has reduced pressure across the team,” he says. “Now, there’s a real understanding that you can pay full attention to the patient in front of you without needing to rush. Being able to care for patients in a comfortable manner is always better.”

It’s not just the IR department and its patients who are happy with the expanded hours. Referring physicians and hospital leaders have praised the change, as well.

“Even though the IRs didn’t formally announce the extended hours initially, referring physicians and other hospital staff quickly noticed that things were getting done faster,” says Donna Hallett, chief administrative officer in BIDMC’s department of radiology. “I certainly view this as a wildly successful effort.”

In fact, BIDMC leaders are thinking about instituting similar schedules in other departments. “The hospital has benefited from earlier diagnoses, more effective management and treatment, and earlier discharge of patients, all while avoiding unnecessary admissions,” Kruskal says. “It’s really a win all around and something that could realistically be duplicated in other areas.”

For other hospitals considering this type of model, Sarwar says that the first step is to get the IR team on board with the extended hours. “It would have been difficult to implement this without buy-in from the techs, nurses, and physicians,” he says, adding that it helped that IR was already “the happiest group in radiology,” according to an internal survey in which IR scored a high rate of satisfaction and showed low levels of burnout.

Another key, Ahmed says, is embracing common ground with hospital leadership. “We all agree that this project enhances patient care — which is a priority across the institution,” he explains.

Breaking the Backlog by American College of Radiology is licensed under a Creative Commons Attribu-tion-NonCommercial-NoDerivatives 4.0 International License. Based on a work at www.acr.org/imaging3. Permissions beyond the scope of this license may be available at www.acr.org/Legal .

Elizabeth Galentine is a freelance writer