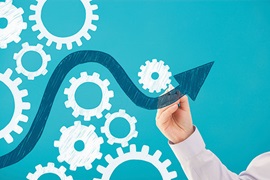 The verb “to structure” means to arrange according to a plan. In health care, having a plan is essential, and there are many ways physicians and administrators already employ structure throughout daily practice. Whether it’s consulting ACR Appropriateness Criteria® to make an evidence-based decision or using uniform lexicons like the ACR’s BI-RADS® and LI-RADS®, structure can help make medical decisions more consistent, organized, and efficient.

However, one area of medicine has been slower to adopt a wholly structured approach: the radiology report. Some practices, like Coastal Radiology Associates (CRA), a 17-radiologist outfit located in New Bern, N.C., have recognized the benefits of a more uniform approach to content. To this end, CRA recently adopted a new structured reporting format. In addition to achieving 100 percent adoption of structured reports, the radiologists have also made a successful business case for supplying the finished report copy to their providers for a fee less than what it would cost the providers in transcription costs.

Since there is often confusion when it comes to terms like “structured reports” and “standardized language,” a definition is in order: According to a study titled “Cohort Study of Structured Reporting Compared with Conventional Dictation,” structured reports are those “with standardized format and phrases, with an accepted lexicon of terms.” These are templates with defined and consistent formatting that incorporate drop-down menus with specific options, allowing health care providers to quickly pinpoint relevant and actionable findings.

Catherine J. Everett, MD, MBA, president of Coastal Radiology, took a leadership role in the practice’s evolution from narrative to structured reports, and then took it a step further by monetizing the finished product. The idea came to her after visiting a practice in Greensboro, N.C., in 2009. The practice, called Greensboro Radiology, owned their PACS and voice recognition (VR) software. Because of this, they were in a position to sell their reports back to the hospitals they served. “They developed this program to basically save money for everybody,” says Everett.

How did the program save money? Crucially, says Everett, by replacing the need for transcriptionists. Additionally, according to Everett, the approach helped the Greensboro hospitals avoid having to each purchase a half million dollar VR system. Since transcription services are normally provided by the hospital as part of the technical component of the exam, the Greensboro practice figured out that pooling a group of provider clients and using one VR system to cover them all would equate to a substantial cost savings for everyone involved.

As a result of this experience, the leadership at Coastal Radiology explored the option of implementing voice recognition for their three client hospitals and imaging center. However, explains Everett, it didn’t make financial sense for each site to purchase its own VR system. It also would have proven challenging for the radiologists to learn a number of different systems if each site decided to go with different vendors. 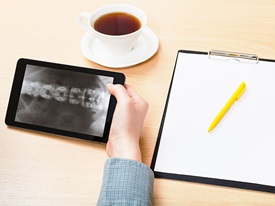 To avoid this, notes Everett, “We approached the hospitals and imaging center and offered to buy the VR system to save them money on transcription costs. That way, we could deliver the reports back to them for a minimal charge.” Basically, Coastal would charge the hospitals and imaging center a premium for taking work off of their plate; in other words, whatever Coastal’s clients would save in not having to buy the equipment, the health care institutions would pay to the practice to purchase and maintain the equipment for them.

Everett acknowledges that the business case, which they made to hospital leadership in mid-2010, was a “hard sell” because, very simply, no one wanted to give up control. “Despite the current trend to merge, every hospital administrator wants to maintain control, and puts up moats to do so,” says Everett. “Plus, having the radiologists own such a vital part of the total radiology picture was scary to them.” But, in the end, she and her colleagues convinced all three hospitals and the imaging center to agree to their proposal because it saved the institutions money on transcription costs.

With that success in hand, Coastal’s leadership decided to take things a step further and improve their reports. Interested in taking advantage of new technologies and processes supporting more standardized care, Dr. Everett and the other practice leaders decided to incorporate structured reporting into the VR. This meant using reporting templates from a shared library. To make their investment worthwhile, Everett estimated that they’d have to be 80 percent self-edited — that is, free of the need for any transcription — within a year. To her surprise, however, the radiologists managed to become 100 percent self-edited within three months.

Coastal Radiology has templates for:

Tim Ludwig, vice president of ancillary services at CarolinaEast Health Systems, one of the hospitals that relies on CRA for imaging services, says that referring clinicians have seen many benefits from structured reports. “The report allows physicians to really zero in on what they’re looking for,” says Ludwig. For instance, if a physician is reading a CT report of the abdomen and pelvis, but he or she is really interested in the pancreas, the information about the pancreas is in the same place in that report as in every CT report of the abdomen and pelvis. “The physician knows exactly where to look,” says Ludwig. “I guess you could compare it to traveling down a road you’re very familiar with: You know where bumps are and where to look for the next exit.” According to Ludwig, making this change has contributed to the overall reputation of the radiologists at CRA as value-adding specialists.

Although using the new structured reporting format has boosted CRA’s bottom line, it hasn’t been the only advantage to making the switch. The new format allows Coastal’s radiologists to adhere more closely to the requirements of CMS’ Physician Quality Reporting System (PQRS). For instance, if fluorscopy time is a required field on the report, the radiologist has to fill it in or they cannot sign the report. “Since we started structured reporting,” notes Everett, “we’ve been virtually 100 percent compliant with all PQRS measures.” Practice leaders encountering resistance from their colleagues about transitioning to structured reports might want to learn from Everett’s example and take ownership of the reporting process.