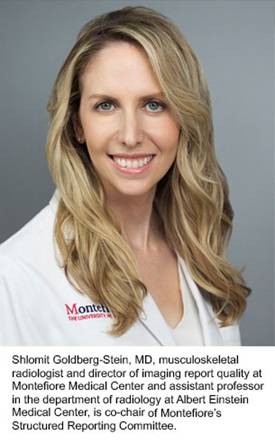 Shlomit Goldberg-Stein, MD, a musculoskeletal radiologist at Montefiore Medical Center, and Meir Scheinfeld, MD, PhD, director of Montefiore’s Division of Emergency Radiology, both completed training at an institution that used department-wide structured reporting. The experience gave them a great appreciation for the benefits of consistent, quality reporting.1,2

So when Goldberg-Stein and Scheinfeld began working together at Montefiore in 2014, they enthusiastically proposed replacing the radiology department’s traditional reports with structured templates. The challenge was getting their colleagues to agree to the change.

Convincing even a small group of radiologists to abandon their traditional reports for structured ones, which organize findings in a standard way and use consistent language to describe common findings, can be difficult. Change is hard for everyone, and structured reporting requires a major change for radiologists to overhaul the product at the heart of their work — their imaging reports.

At Montefiore, the challenge was even greater because its imaging department is no small group and is also physically separated across several hospitals and outpatient centers. The department has well over 100 radiologists, including more than 80 attendings, more than 35 residents, and about a dozen fellows, who serve four hospitals and 11 outpatient facilities for the academic tertiary care center in the Bronx, N.Y.

“We have a large faculty and many of our members have been dictating reports their individual way for 20, 30, 40, or more years. Even some of our young attendings have very strong opinions about how their reports should look,” says Goldberg-Stein, who is also director of imaging report quality and an assistant professor in the department of radiology at Albert Einstein Medical Center. “We knew our biggest challenge would be getting everybody on board to standardize our reports across the sprawling enterprise.”

In 2014, with strong support from radiology department chair E. Stephen Amis, MD, FACR, Goldberg-Stein and Scheinfeld committed to overcoming this challenge. They became co-chairs of the department’s Structured Reporting Committee and launched a performance improvement project to develop and implement structured reporting templates for all cross-sectional imaging exams. Within two years, the team released templates corresponding with 95 percent of dedicated exams by volume, and the department’s radiologists were using the templates 94 percent of the time.3 (See a sample template.) Here’s a look at how the team at Montefiore achieved this difficult task.

Before Montefiore instituted structured reporting, its radiologists typically used traditional narrative reports. Goldberg-Stein says the problem is that narrative reports are highly variable, and the actionable information within them may be hidden. “Some radiologists believe their personal reporting style and idiosyncrasies are valuable,” she says. “But the intended subtleties may not be appreciated or understood by referring physicians. If radiologists as a group don’t communicate findings clearly and consistently, that can be detrimental to patient care and can lead to inappropriate treatment down the line.”

This is especially true when it comes to emergency medicine, where minutes often matter. Danielle B. Weinman, MD, emergency medicine attending physician at Montefiore, says she spent a lot of time scouring the unstructured reports to find the information she needed to care for patients. “I felt like I was reading on and on, looking for the meat within the text,” she says. “As an ER physician treating a high volume of patients who have varied needs, I don’t have time to hunt for information in a report.”

Goldberg-Stein and Scheinfeld knew structured reporting could resolve many of these issues. With this in mind, they began working together to develop a plan for instituting structured reporting within the department and pitched the idea to Amis, who was immediately receptive to the proposal.

“I thought it was a great idea, because every so often I would sit down and review about 100 of our reports, and they were all over the place,” says Amis, who is also a professor in the department of radiology at Albert Einstein College of Medicine. “With structured reporting, our reports are consistent, and we confirm that the interpreting radiologist has gone through everything in a structured way and has recorded exactly what he or she saw.”

After giving his approval for the project, Amis worked with Goldberg-Stein and Scheinfeld to outline three project criteria: First, the project would focus on CT, MRI, and ultrasound reports. (X-ray reports were excluded from the project’s first phase because they were generally succinct.) Second, they would develop the templates using a consensus approach, with input from radiologists throughout the department. And finally, while findings would be presented in a structured order within the report, the radiologists would still be able to describe the findings in the manner they wanted (no standardized lexicon was mandated). 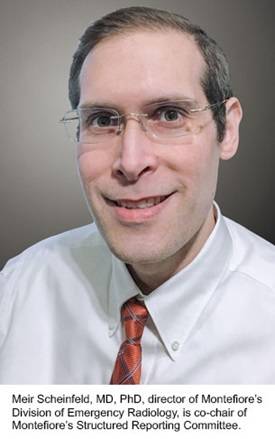 “We established these criteria because we wanted to make sure we had complete buy-in from the faculty,” Amis explains. “Structured reporting can be pretty onerous if you don’t approach it in the right way. It was extremely important to me that we got input from the members of each division and that we gave them some latitude in how they phrased their interpretations. I didn’t want to just shove this down their throats.”

Mordecai Koenigsberg, MD, FACR, director of ultrasonography and director of the residency program at Montefiore, was one of the radiologists who were initially skeptical of the initiative. “I have very strong feelings that reports should be organized in a certain manner, and I was concerned that one person would determine how the reports would be structured and then everyone else would just have to follow along,” explains Koenigsberg, who is also a professor of radiology at Albert Einstein College of Medicine. Koenigsberg quickly realized his assumptions about the process were inaccurate.

After gauging Montefiore radiologists’ initial impressions of structured reporting, Goldberg-Stein and Scheinfeld recruited approximately 35 representative radiologists from all of Montefiore’s sites to serve on the Structured Reporting Committee. The committee was then divided into six subcommittees that corresponded with the six primary subspecialties that perform cross-sectional imaging: abdominal, cardiothoracic, musculoskeletal, pediatric, ultrasound, and neuroradiology. These subcommittees were responsible for crafting the initial drafts of the reporting templates.

During this second two-week trial, the co-chairs again collected feedback from the radiologists and shared it with the subcommittee members, who voted on whether to implement each suggested change. They then shared the voting results with the entire department. “We took everyone’s comments seriously and addressed every comment by either accepting or rejecting it,” Scheinfeld says. “For those comments that we rejected, we provided a reason why they were rejected. This transparent approach was critical to getting everyone to go along with the project.”

As the Structured Reporting Committee finalized each template, the co-chairs worked with the IT department to optimize and standardize the voice command fields, ensuring the template would load and auto-populate correctly during dictation. From there, the committee announced a predetermined date when the new standard department-wide template would begin to auto-populate for all users at the start of exam dictation. These “go live” events were facilitated by the IT department to ensure a continuous and uninterrupted workflow. 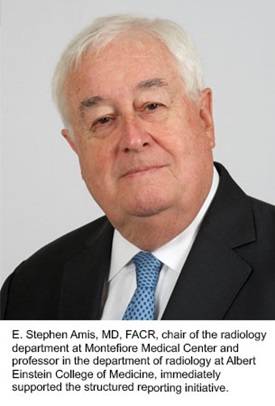 Within two years of initiating the project, the team released templates corresponding with 95 percent of dedicated exams by volume. Many of the templates were disease-specific and facilitated increased adherence to national reporting guidelines, including Lung-RADS™, Li-RADS®, and Pi-RADS™. Additionally, an analysis of 12 exam types showed that the radiologists used the templates 94 percent of the time.

“We’re pleased with the high level of compliance, especially since we don’t offer an incentive for using the templates or a penalty for not using them,” Scheinfeld says. “People have ultimately come on board because they think it’s a good idea, and they have realized that structured reporting has benefits.”

In Koenigsberg’s case, he made a conscious decision to give structured reporting a try and soon his skepticism dissolved. He says the committee’s iterative process, which included input from all of the department’s radiologists, was especially motivating. “I bought into the approach as I used it,” Koenigsberg says. “I found that it made me more efficient because a lot of the housekeeping that you’ve got to address in your reports is already taken care of. This allows you to spend time talking about a particular area where there is a pathology that you’d like to really go in-depth on.”

Referring physicians also appreciate the structured reports. “I like the organization of the structured reports,” Weinman says. “I can move through the report more quickly and look at everything more thoroughly. I can easily check the organ system I am most concerned about and check for anything that could have masqueraded as a different symptom and led us astray. This allows me to provide better patient care. It’s a real change for the positive.”

While Montefiore is a large academic center, institutions of any size can implement and benefit from structured reporting, Goldberg-Stein says. “The main thing is to tailor your initiative and implementation timeline to your organization,” she says. “A small private practice might have to come to different compromises than a large academic center to bring as many people on board as possible, but that’s OK. Be responsive to those radiologists who are skeptical of structured reporting, while maintaining a focus on the ultimate goal of improving reporting quality.”

To explore the resources Goldberg-Stein and Scheinfeld used during the educational phase of the structured reporting project, check out these articles:

Structured for Care by American College of Radiology is licensed under a Creative Commons Attribution-NonCommercial-NoDerivatives 4.0 International License. Based on a work at www.acr.org/imaging3. Permissions beyond the scope of this license may be available at www.acr.org/Legal