A hospital integrates radiology eConsults into its EMR to make it faster and easier for PCPs to get answers about imaging and improve patient care. 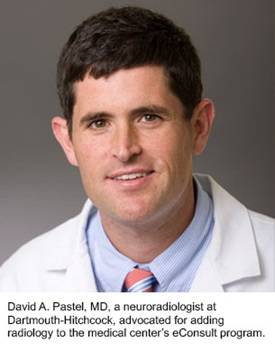 Physicians often use the phrase “curbside consult” to reference getting informal advice from colleagues. In a curbside consult, a primary care physician (PCP) might call, email, or page a specialist for input on an image or finding. As experts in appropriate imaging, radiologists are often part of these informal consultative conversations, fielding such questions as, “Does this patient need a chest CT?” and “Does this brain MRI finding require further imaging?”

Although curbside consults are widely used in medicine, they are often inefficient and time consuming. What if the specialist isn’t available when the PCP calls? What if the PCP’s email gets buried in the specialist’s inbox? In the past, the result was often delayed decision-making, which can directly impact patient care. All that is changing, however, through the power of technology.

At Dartmouth-Hitchcock Medical Center in Lebanon, N.H., the curbside approach to consulting with specialists has been augmented by an automated process that allows PCPs to ask questions through a system embedded in the hospital’s electronic medical record (EMR). The eConsult program, which leverages new technology developed by the University of California, San Francisco (UCSF), enables PCPs to more efficiently and directly communicate with specialists, expediting patient-care decisions, while ensuring appropriate image ordering for higher-quality patient care.

Here’s how it works, according to David A. Pastel, MD, a neuroradiologist at Dartmouth-Hitchcock: The PCP places an “order” for an eConsult in the patient’s chart in the EMR. This eConsult order lands in the in-basket pool for the specialty. In the radiology department, an administrative person monitors this pool and directs the eConsult request to the appropriate radiologist via the EMR.

Recipients of the eConsult request have 72 business hours to respond to questions within the EMR. After the 72 hours have elapsed, they receive a reminder alert. This ensures that PCPs don’t have to open another program on their computers to send an email or to pick up the phone, both of which can be unreliable methods for getting a quick answer.

The results of the eConsult pilot program are already proving impressive at Dartmouth-Hitchcock. Today, 86 percent of the hospital’s PCPs are using eConsults, with nearly all of them reporting that they are “very satisfied” with the program.

In 2014, Dartmouth-Hitchcock was one of five academic medical centers working with the AAMC that received the three-year grant to integrate an eConsult program into its EMR to improve communication and coordination between primary and specialty care, contain costs, and avoid unnecessary testing.

Implementing the eConsult program at the hospital involved using the templates developed at UCSF to serve as a basis for Dartmouth-Hitchcock’s template formation. With input from specialists and PCPs, the eConsult team developed streamlined templates that allow PCPs to ask specialists low-acuity clinical questions, with the appropriate data available to enable specialists to give a timely and thoughtful response.

While the original CMS grant provided funds to support implementation of eConsults in up to 15 specialties (12 medical and three surgical) at each center, one specialty was left out: radiology. It wasn’t until Lisa Pastel, MD, MPH, a PCP and member of the eConsult primary care template review committee at Dartmouth-Hitchcock, began reviewing the neurology eConsults that she recognized this major oversight.

“I was surprised to see a choice in the neurology eConsults for ‘review of imaging,’” she says. “I wondered why neurology was being asked to review imaging instead of radiology.” Lisa Pastel, who is also an assistant professor of medicine at Dartmouth-Hitchcock, mentioned this to her husband, David Pastel.

Pastel’s reaction was the same as his wife’s: “It’s in everybody’s interest for radiologists to answer questions pertaining to imaging. If there is an abnormal imaging finding, a radiologist has the proper training and experience to determine the correct next step.” 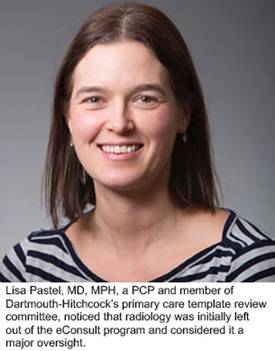 Since radiology was not part of the original CMS innovation award, Dartmouth-Hitchcock had to figure out how to pay for the service. David Pastel says the hospital recognized radiology eConsults as an important service to enhance patient care and keep down costs associated with unnecessary imaging orders.

“All imaging eConsults receive reimbursement from a Population Health Innovation Fund through Dartmouth-Hitchcock’s Population Health Management Council,” says David Pastel. According to L’Heureux, the process of getting support from the fund was simply a very informal request between David Pastel, the eConsult team, and the council.

All in the Details

Under the eConsult program, PCPs use standard templates built directly into the EMR to consult with radiologists about what tests to order and ask typical imaging-related questions — for example, how to handle a thyroid nodule finding. “The eConsult platform brings PCPs closer to the radiologist,” says David Pastel. “And it helps ensure our patients receive the appropriate imaging test as well as better management of abnormal imaging findings.”

For radiology eConsults, all of the templates include the same basic questions with slight variations for subspecialties. This organization makes it simple for PCPs to find the correct eConsult template and submit their questions to the appropriate specialist through the EMR. At the end of each consult, the specialist is asked whether or not the consult is appropriate. A high-acuity consult would be flagged as inappropriate, and the referring PCP would be notified.

“It is always the prerogative of the specialist, no matter the specialty, to decide if an eConsult question is clinically appropriate and best handled in this format, or whether it would be better addressed via a face-to-face referral due to the complexity of the issue,” L’Heureux says.

Since the program began in August of 2016, radiologists have received nearly 60 consultation requests. David Pastel says that while six core subspecialty radiologists handle most of the eConsults at Dartmouth-Hitchcock, another four imagers have been occasionally called on to answer specific eConsults, for a total of 10 participating radiologists.

For radiologists, responding to eConsult requests has proven to be a quick process. A recent survey indicated that of all eConsults at Dartmouth-Hitchcock, 35 percent take between 5–10 minutes, 35 percent take 11–20 minutes, and 30 percent take more than 20 minutes to answer. The volume of radiology eConsults is also manageable, typically about six per month — mostly regarding neuroradiology and body imaging.

In light of the move toward quality-based care, the eConsult program has provided great value to both PCPs and patients. David Pastel gives an example to illuminate the program’s worth:

“Just the other day, I received an eConsult where a patient had an emergent head CT scan after a fall, and a possible small meningioma was incidentally found,” he says. “Usually, a finding like this gets punted back to the PCP. They read it and often don’t know what to do next. I received an eConsult from the PCP that said, ‘What should I do with this? Should I order an MRI?’ I saw that the patient was 68 years old, so I recommended an MRI to evaluate further.” 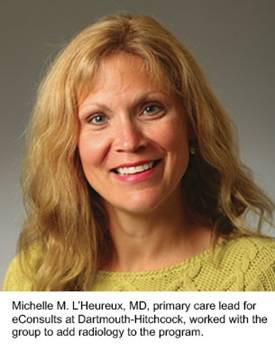 He adds that while for this patient the MRI only verified a need to follow up over time, it also saved the PCP from referring the patient to neurosurgery, and it calmed the patient’s anxiety. “The patient was concerned about the meningioma finding. His mind was put at ease when the MRI showed that he should just have another scan in six months to a year to ensure stability.”

This anecdote shows the value of eConsults in radiology, both to PCPs and patients. A recent survey indicated that 86 percent of Dartmouth-Hitchcock PCPs are now using eConsults. Of those PCPs surveyed, 95 percent at the hospital said they are “very satisfied” with the eConsult program.

Lisa Pastel says that eConsults are less time consuming and commonly more effective than a phone call. Plus, eConsults allow better documentation of queries in the patient chart for all providers to see in the future.

“I often learn about appropriate imaging from the eConsult and share that with other clinicians in my practice,” Lisa Pastel says. “These eConsults are spreading knowledge of how to handle questions that often went unanswered or were fielded by the wrong clinician.”

L’Heureux agrees, saying that “an additional benefit radiology eConsults bring to the table is the assistance they provide with choosing the right imaging test the first time. This in turn avoids unnecessary or redundant testing for the patient, which is a win-win situation for all involved.”

Although patients are not fully aware of the eConsult program, some were surveyed about whether their PCP had asked for input from a specialist, with logic built in to help identify if the referral was from an eConsult. Forty-nine percent of those patients surveyed were very satisfied with their eConsults, and another 32 percent were satisfied.

David Pastel says PCPs often thank him after an eConsult. “They’re really busy, and they’re managing complicated patients with multiple medical problems. If we can quickly answer their questions without requiring a phone call or looking up answers, then it’s a huge deal,” he states. “It’s important for us as radiologists to demonstrate our value beyond interpreting studies. We really do more than interpret studies all day”.

If you’re interested in establishing an eConsult program at your hospital, check with your department chair to gauge interest, or ask them to bring the idea to your hospital administration. In addition, consider convening a group of PCPs and specialists to form an eConsult committee to discuss how you might formalize your curbside consults in the absence of a technological solution. Once this initial plan of action is settled, explore funding options to automate the process.

Certain vendors integrate eConsults and templates directly into their EMRs. If the eConsult functionality and templates aren’t already built into your EMR, check with your vendor about creating an eConsult program.

One other important tip: Keep an eye out for the results of CMS’ evaluation of the eConsult grant program (expected in the fall of 2017) to see if this service becomes reimbursable, so you don’t have to seek additional sources of funding.

Although eConsults are not currently a billable service, David Pastel hopes that will change: “I think the payers may be eager to start paying for eConsults if they see it saves them money down the line — especially if it can help them avoid having to pay for a patient to visit a specialist.”

Until then, David Pastel emphasizes that the program is more about enhancing radiologists’ value as imagers, not earning RVUs. “As accountable care organizations become more widespread, it’s very important for radiologists to be as accessible and helpful as possible to PCPs,” he says.