An Indianapolis hospital implements a radiology cloud for seamless image transfer among referring hospitals in a tri-state area. 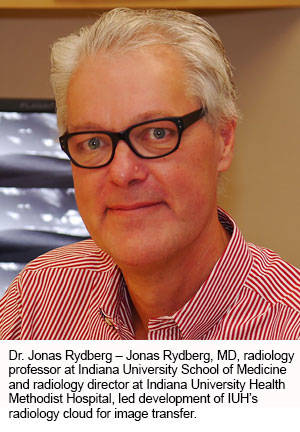 In 2012, an Indiana woman was taken to her community hospital after falling from a moving vehicle, and an abdominal CT showed she had sustained serious injuries. The local hospital decided to transfer the woman to Indiana University Health (IUH) Methodist Hospital’s Level I Trauma Center in Indianapolis for treatment.

With the ambulance en route, the community hospital digitally transmitted the woman’s CT exam to IUH, allowing the trauma team to review the exam 45 minutes prior to the patient’s arrival. From the images, the team determined the woman had active bleeding in her spleen. In response, the interventional radiology team prepared the IR suite, and when the woman arrived she was taken directly there for a procedure to stop the bleeding. This scenario would have been inconceivable without the IUH Radiology Cloud — a web-based image transfer system.

Before the cloud, when a hospital transferred a patient to IUH Methodist Hospital, the largest trauma center in the state, it had to burn the patient’s images to a CD and send the disc to the center with the patient. But at least 3 percent of acute trauma patients arrived without a CD that IUH could import because the transferring hospital forgot to either make the CD or send it with the patient, the CD was lost in transport, or IUH’s system could not read the disc. The archaic process meant that up to 5 percent of the trauma center’s patients required rescans — resulting in delayed care (upwards of 30 minutes), increased costs, and unnecessary radiation exposure.

That’s not the case anymore.

The IUH Radiology Cloud allows referring hospitals to instantaneously transfer images to IUH over the Internet and vice versa. Jonas Rydberg, MD, radiology professor at Indiana University School of Medicine and medical director in the radiology department at IUH Methodist Hospital, led the cloud’s development in 2012. Now, IUH uses the system to send and receive images to and from nearly 100 referring hospitals throughout Indiana and in Illinois and Wisconsin. The web-based program saves approximately 150 trauma patients from rescan annually and is now being expanded to other parts of the hospital. “It doesn’t take many cases to realize the power of the system to improve patient care,” Rydberg says.

In fact, Rydberg recognized the cloud’s potential to improve care the moment one of IUH’s trauma surgeons suggested creating it. “It was clear that if we could access the images before patients arrived at the trauma center — which receives about 5,000 calls from referring hospitals annually, most of whom arrive via helicopter or ambulance — we would have a better understanding of their issues and could provide more efficient care,” he says. Rydberg knew the radiology team had the technical expertise to develop the cloud system and volunteered to lead the effort.

Rydberg informed hospital administrators about the project but didn’t request their financial support or seek assistance from the hospital’s information technology team to develop it. Instead, the radiology department funded the project through its operating budget and built the system out itself. “Our radiology administrator believes the cloud is so beneficial to patient care that he has accepted the cost,” Rydberg explains. “We have had four people — myself, the administrative director, the imaging services director, and one PACS specialist — working on this project between our regular tasks. We haven’t hired anyone or assigned anyone to solely develop the cloud. As long as you have a couple of people to drive the project forward, you don’t need a big, formal decision from the C-suite.”

To get the project going, Rydberg and his team needed a vendor to host a cloud server for the image transfer. They ultimately contracted with health care solutions provider Nuance, which charges a nominal fee for each exam IUH and its partners send through the system. IUH covers all of the transfer costs, which are less than the cost of handling CDs, leaving its partnering hospitals responsible for just their setup costs. “Hospitals need only a virtual server on their PACS to connect to our system,” Rydberg says. “They can download this server from the vendor for free, so the only cost they incur is one or two days of an information systems person’s time. It was important to keep the cost low, because most hospital budgets are tight.” 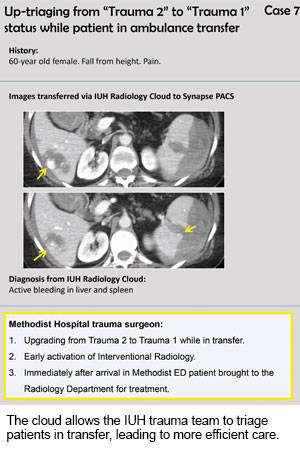 Rydberg and his team worked with Nuance to build the system, a process that took nearly six months. The primary reason the process took that long, Rydberg says, was because the radiology team didn’t like the system’s initial setup as a “doctor-to-doctor” platform, which required physicians to log into the vendor’s website to view the images. At Rydberg’s request, the vendor reconfigured the concept as a PACS-to-PACS system, allowing IUH’s doctors to view the cloud images on the hospital’s PACS, along with all of the patient’s other exams. “That has been one of the reasons for the system’s success,” Rydberg notes.

Here’s how it works: Once a hospital connects its PACS to the IUH system, it can transmit images directly to the cloud. The system automatically transfers the exams to IUH’s PACS, where the exams are stored, allowing the trauma team and other physicians to view the images for the current episode of care and for future comparison studies. “We could have set the system up so that the images were stored on the cloud server for just 45 days before being erased, but then we would have lost the continuum of care,” Rydberg says. The process is similar when IUH sends images to partnering hospitals.

Once the cloud infrastructure was in place, Rydberg began contacting referring hospitals about joining the system. Rydberg first called the administrative directors of the radiology departments at the eight IUH hospitals that are not connected to the health system’s main PACS. He explained that if these hospitals connected to the cloud, they would ensure better trauma care for patients and integrate more closely with the health system. All eight hospitals joined without hesitation.

Partnering with hospitals outside of IUH was more challenging. “Hospitals usually compete with one another, so I didn’t know anyone at the other hospitals,” Rydberg says. He enlisted colleagues like Melissa Hockaday, MSN, ACNP-BC, service line leader for executive trauma and acute care surgery at IUH Methodist Hospital, to help make connections with referring hospitals. “As a clinical champion, I reached out to the facilities that transfer patients to us and explained how the radiology cloud positively impacts patient care,” says Hockaday, also an acute care nurse practitioner for trauma and critical care at IUH Methodist Hospital.

Some referring hospitals joined the cloud right away, while others took a bit more convincing. A few hospitals were concerned the cloud would give IUH unauthorized access to their systems. “This has been a real fear because most people don’t know how a cloud system works, and they’re suspicious about our intentions,” says Rydberg. To alleviate those concerns, Rydberg explained that IUH would not be able to access the hospitals’ systems through the cloud. He also assured the hospitals that the cloud was a much more secure way to share images than CDs, which are easily lost, and that IUH would also send images to partnering hospitals through the cloud to support continued patient care at those facilities. Nearly all of the invited hospitals agreed to join the system once they understood how it worked. 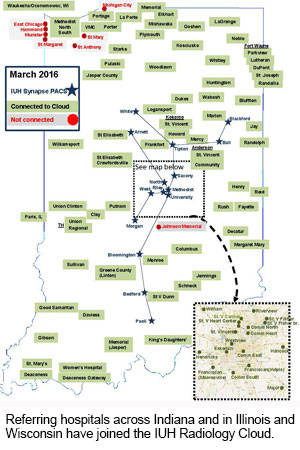 As hospitals began using the cloud, the system’s benefits became increasingly clear. In addition to giving the trauma team access to transfer patients’ images, the system allows IUH surgeons to triage patients remotely and provide guidance about whether a patient should be transferred. “It allows us to look at images in real time and help physicians at the other hospitals with management decisions,” says David W. Roe, MD, medical director of lung transplant and extracorporeal membrane oxygenation at IUH Methodist Hospital. In fact, several transfers have been canceled because the trauma team determined the patients were so acutely ill that relocating them would have done more harm than good, Rydberg says.

With the cloud’s impact on trauma care evident, the system is now being expanded to other IUH departments, including cardiology, organ transplant, and mammography — areas where patient images are often shared among facilities. Paul Y. Kwo, MD, professor of medicine in the gastroenterology/hepatology division at Indiana University School of Medicine and medical director of liver transplant at Indiana University Health, says the system has made his patient interactions more meaningful. “Now I can tell a patient, ‘Hang here in the exam room for 20 minutes; we’re going to call these hospitals where you’ve had imaging in the past and have them load your images onto the cloud so we can go over all of your exams at the same time,’” Kwo explains. “It’s markedly more productive.”

IUH currently receives about 8,000 exams from partnering hospitals each month and sends nearly 5,000 exams to them through the cloud. The system has helped illustrate the unique competency radiologists bring to the health care system. “Particularly with the transition to value-based payment models, radiologists must add to the total quality of patient care and to the total quality of the hospital system,” Rydberg says. “Spearheading the cloud’s development has allowed us to further demonstrate our value across the organization and
has positioned us to help drive the future of patient care at IUH.”

Direct Image Transfer Support by American College of Radiology is licensed under a Creative Commons Attribution-NonCommercial-NoDerivatives 4.0 International License . Based on a work at www.acr.org/imaging3. Permissions beyond the scope of this license may be available at www.acr.org/Legal.