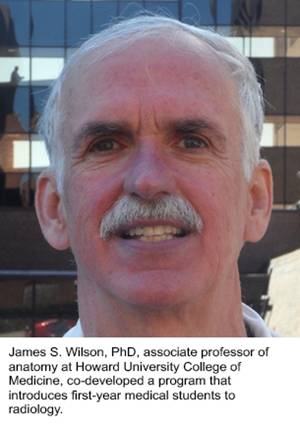 For years, the anatomy faculty at Howard University in Washington, D.C., used traditional radiographs to help teach first-year medical students about the human body. But explaining how the two-dimensional images on the screen corresponded with the cadavers on the dissection table was difficult. Students often looked at the images and asked, “How do we know what the images are showing?”

To help students connect what they were learning about three-dimensional anatomy in the lab with the two-dimensional images, the anatomists needed more than a few radiographs. They needed a dynamic program that would introduce students to the fundamentals of modern imaging interpretation — and they needed to deliver it without adding additional weight to students’ already heavy course loads or costs to the department’s already tight budget.

With this in mind, the anatomists partnered with Howard’s radiology department to develop a self-directed, low-cost program in which students use DICOM -based image viewers to study actual cases and test their imaging knowledge alongside their traditional anatomy lessons.1

Launched seven years ago, the program provides a holistic understanding of anatomy that James S. Wilson, PhD, associate professor of anatomy at Howard University College of Medicine, says prepares students for the medical licensing exam and beyond — with the added potential of attracting students to radiology as a specialty.

Whether or not they pursue a radiology specialty, though, all medical students should attain a basic understanding of radiology.

“Imaging is often the first point on a patient’s care pathway, where diagnoses are made and treatment plans are formed,” explains André J. Duerinckx, MD, PhD, professor and chairman of radiology at Howard University College of Medicine and Howard University Hospital. “All good doctors should be comfortable looking at images and discussing cases with radiologists. These are lifelong skills that we want to instill in our students from the start.”

While anatomy and radiology may be inherently compatible, Wilson and the other anatomists at Howard previously struggled to help students correlate the two. Some other universities have overcome this hurdle by investing in sophisticated anatomy visualization tools, but Howard didn’t have funding for such technologies. Besides, Wilson thought, why spend a lot of money on an anatomy visualization tool that students would have to take turns using in the classroom?

Wilson had a breakthrough when his daughter underwent a nasal septum CT and came home with a CD of her images. He popped the disc into his computer and was prompted to download a free DICOM reader, which allowed him to move through all of the slices in the study. 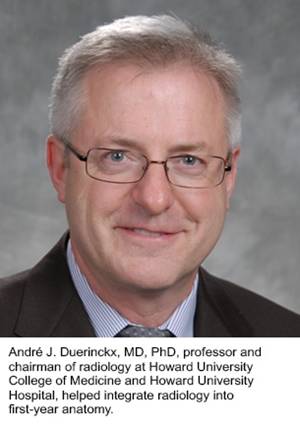 “For years, I had been trying to explain how the axial section relates to the sagittal section, and these DICOM viewers show that automatically,” Wilson says. “I was not aware of these products until my daughter came back with her images.”

As it turned out, the timing was perfect. Duerinckx, who had just become radiology chair, had a personal interest in anatomy and encouraged his team to collaborate with the anatomy department.

When Wilson stumbled across the DICOM viewers, Duerinckx saw an opportunity to do even more. “I had wanted to create a program like this for a long time, and once we found this software that allowed students to navigate through 3-D datasets from any location, we were able to make it a reality,” Duerinckx says.

Through online research, Wilson and Duerinckx found two DICOM viewers that students could download for free onto their computers and tablets, OsiriX for Apple users and K-PACS for Windows and Andriod users.

“We wanted to go from showing students still images to using interactive 3-D datasets, and these viewers made that possible,” Duerinckx says. “Students can scroll through the coronal, axial, and sagittal planes. It’s exactly what professional radiologists use, just at a lower resolution, and the big advantage is that it’s virtually free.”

With the technology in place, Wilson and Duerinckx focused on delivering the program without requiring additional instructional time. To that end, they incorporated it into anatomy’s existing small group learning (SGL) sessions, in which students work together on self-directed lessons. “Students in SGL largely teach themselves, and if they get stuck, they can ask faculty for help,” Wilson says.

Wilson and Duerinckx initiated the program as a two-year pilot project. The first case they selected involved a patient who fell as he was carrying his wheelchair-bound wife up a flight of stairs and the wheelchair handle penetrated his eye, exploding it into his maxillary nasal cavity.

Duerinckx and his team redacted all identifying patient information from the study and copied the images to CDs, which students loaded to their DICOM viewers. “We showed the students how to use diagnostic imaging to determine exactly what had happened, which part of the skull had been damaged, and if any of the brain was affected,” Duerinckx explains. “It fit very nicely into the curriculum and immediately got the students’ attention.”

Drawing students into the program was important because student satisfaction drives much of Howard’s curriculum. Recognizing this, Wilson identified student champions who helped promote the program among their peers.

Jaqueline Alvarez, MD, now a diagnostic radiology resident at the University of Washington in Seattle, was one of those champions. “It makes complete sense to pair radiology with anatomy,” she says. “Unless you become a surgeon, the primary way you’re going to encounter the anatomy in clinical practice is through radiology, so knowing how to navigate through an imaging study is crucial. This program prepares students for real-world practice.”

“Many of the students said that they were enthusiastic about the program because they knew they were going to have to do the work eventually,” Wilson says. “They recognized that it would actually be less work in the long run and that it would position them well for the next steps in their training. We had total student support going into our meeting with the curriculum committee.”

At the end of the pilot, Wilson and Duerinckx went before Howard’s curriculum committee to formalize the program. During the meeting, they outlined how they had successfully implemented the program without significant cost or added instructional time. 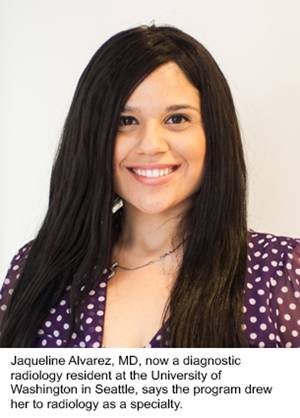 Alvarez was a student leader on the committee at the time and gave a student’s perspective on the program. “The committee saw that the correlation between anatomy and radiology was really needed and recognized how it would make us better doctors. It was the first time I saw the committee provide unanimous support for something,” Alvarez says.

Since then, Wilson and Duerinckx have continued to refine the program. For instance, when Duerinckx and his team pull a case for the anatomists to use in the classroom, they no longer burn the images to CDs. Instead, they redact the identifying patient information and put the images on a cloud server, where students can download them directly. Wilson has also created a series of short YouTube videos  to help students use the DICOM viewers.

“Over the years, students have required less and less guidance in using the viewers,” Wilson says. “We download the software, give them the datasets, and they figure it out with little instruction. The videos are there to help them with specific questions they might have along the way.”

The most significant change related to the program has come from the students. Rather than asking what the images are showing, students are now associating the images directly with the cadavers.

“The students are looking at the real cases and real images that the clinicians had to analyze with tools that mimic what radiologists use in practice,” Wilson explains. “It makes the lessons much more realistic and gives students a much more comprehensive understanding of the human body without expanding the size of the curriculum.”

Although not a stated goal of the program, this sense of realism has encouraged some students to specialize in radiology. In fact, Alvarez says that the program influenced her decision to become a radiologist.

“I really got to know what radiology was through the small group learning, and it really piqued my interest in the specialty,” she says. “As I quickly learned in residency, radiology is a whole other universe: It has its own language, and it really impacts how patients are treated. Having exposure to it so early in my career made me a little more comfortable when I began seeing images in clinical practice. That experience helps all students, including future non-radiologists, understand what radiologists do and how they can work with radiologists to improve patient care.”

Preparing students in this way is something any medical school can do, Duerinckx says. “What we’re doing is very easy to duplicate in many medical schools with minimal effort,” he says “All you need is one or two radiologists who are willing to spend a little bit of time with the anatomy professors to get it started.”

While more high-tech solutions exist to introduce students to radiology, Wilson contends that they’re really not necessary. “Our approach is very inexpensive, and in the long run, it’s much more satisfying because the students can explore the cases in their own workspace,” he says. “Sometimes the simplest option is best.”