Radiologists at NYU Langone Medical Center implement new initiatives to increase interaction with referring clinicians.
Get a PDF version of this Case Study
Download
The more things change, the more they stay the same. It’s a saying that holds true for many things — including radiology. The profession has experienced significant changes through the years, including a reduced amount of interaction between radiologists and clinicians. In the past, clinicians conducted radiology rounds to review and discuss images with radiologists. But as they began accessing images remotely through PACS (and their schedules became increasingly hectic), clinicians engaged in radiology rounds less often. Today, such rounds rarely occur — leaving radiologists struggling to restore their relationships with referring physicians.

Yet, as much as radiologists’ interactions with clinicians have changed through the years, one thing has remained the same: the radiology report. While radiology reports are now created and often read on computers, they are still static documents that outline all findings in lines of prose. They generally have not evolved to include embedded images, annotations, tables, or other media that might help referring physicians better understand the findings and showcase radiologists’ expertise.

When radiologists at NYU Langone Medical Center in New York City considered how much their interaction with clinicians has dwindled and how little their reports have advanced, they took action by developing two initiatives to address the issues: virtual radiology rounds and multimedia reporting. Initiated within the past 18 months, both efforts are helping to improve communication with clinicians and emphasize the significance of radiology in patient care, as outlined in ACR’s Imaging 3.0TM campaign, says Michael P. Recht, MD, Louis Marx professor of radiology and chairman of the department of radiology at NYU Langone Medical Center. “The initiatives are the definition of Imaging 3.0. They make radiologists more visible and create more value for both referring physicians and patients.”

To compensate for the reduction in radiology rounds, Langone’s radiologists initially integrated reading rooms into the hospital’s subspecialty referring physician areas, where they read images and consulted with clinicians on location. But without enough radiologists for every physician area, the team developed virtual radiology rounds to serve all of the areas remotely. “We wanted to make it so that if the clinicians couldn’t come to us and we couldn’t physically go to them, we could still provide consultation,” Recht explains.

Through the virtual rounds program, clinicians arrange web meetings with radiologists to review images. The clinicians and radiologists then use web cameras to see each other during the meetings, and they also remotely share a 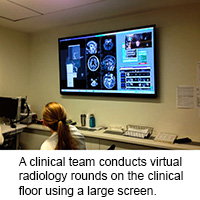 computer screen and mouse. This allows both parties to point out details on the images, provide feedback, and ask questions — just as they would during in-person consultations. “It’s restoring that interaction between the radiologists and the referring clinicians,” Recht says. “It’s also a great teaching tool, because we’ve started this in the intensive care units, where the residents are gaining a better understanding of how imaging impacts their patients.” The hospital’s emergency department is also slated to use the technology, allowing physicians to consult directly with radiologists in their subspecialty areas.

Next, virtual rounds will be expanded into virtual consults on demand, offered to some of the hospital’s outpatient physicians’ offices, where Recht expects they will have a significant impact on how imaging from other radiology centers is handled. Currently, when a patient arrives with images from an outside practice, the physician sends the images to the radiologist. A couple of days later, the physician contacts the patient with the findings. With the virtual consults on demand, as physicians load the images into the hospital’s PACS, a pop-up message asks whether they want to speak with a radiologist. When the physician clicks yes, the radiologist taking those cases receives a text message on his or her computer, tablet, or phone for an on-demand consultation. 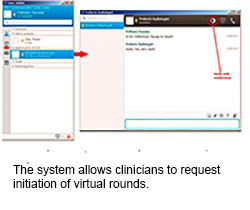 At that point, the process proceeds just like the intensive care virtual radiology rounds, except in this case (as a pilot study at NYU Langone has shown), patients might be present for the consultations. “This is going to be a huge value for referring physicians and patients, and it’s going to restore what a lot of us really enjoy about radiology — our interaction and consultation with referring physicians,” Recht says. “We’re restoring the idea of being consultants in patient care and being integrated into the clinical care team.”

NYU Langone’s radiologists are further promoting their expertise through multimedia reports — a tool they hired a vendor to develop after considering the inefficiency of writing lesion measurements in lines of prose. “Nobody who deals with numbers and measurements would ever accept that as a way to present figures,” Recht explains. “If you go to other areas that deal with numbers, you have tables and charts.” So radiologists at NYU Langone developed the multimedia reports to include tables that track both new and old lesion measurements as well as embedded images. Soon they will also add annotations and possibly movies of exams such as ultrasounds. “We want a report that really shows referring physicians what we do and, more importantly, delivers the findings in a way that is much more user friendly,” Recht says. 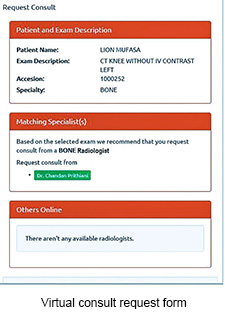 Andrew B. Rosenkrantz, MD, MPA, associate professor in the department of radiology at NYU Langone Medical Center notes that for the multimedia reports to be effective, they had to be integrated into radiologists’ existing workflow. To that end, radiologists partnered with the hospital’s radiology information technology team and an outside vendor to develop a tool that automatically creates the multimedia report from the radiologist’s standard report. “It can scan our standard report and identify the image references and just embed the images automatically,” Rosenkrantz explains. “Then for the lesion table, we have macros to insert tags, and we construct the table from those tags.”

When a clinician requests a virtual consult, the system suggests the most appropriate radiologist. The clinician can override that suggestion if they feel another radiologist is more appropriate.

NYU Langone’s radiologists have created thousands of multimedia reports already, but not every case requires one. The radiologists determine whether a multimedia report is warranted; typically one will not be issued for a normal scan, Recht says. For cases that do warrant such a report, the media elements allow referring physicians to see exactly what the radiologists are referring to in the written report for the first time. 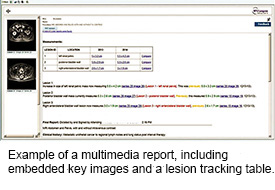 “When we see a lesion in the liver, it is very obvious to us. But when referring physicians try to look at the images, they don’t know exactly what we’re talking about, so they have to guess,” Recht says. “With the multimedia reports, they don’t have to guess what we’re referring to. It allows them to gain much greater value out of our imaging reports and develop better management plans for patients.”

NYU Langone spent months developing the virtual radiology rounds and multimedia reports with help from outside vendors. As the programs have been implemented, radiologists have surveyed referring physicians to gauge their satisfaction and request suggestions for improving the systems. “The referring physicians are guiding us as we develop the programs, so this is all being done in a very iterative fashion in response to the clinicians’ needs,” Rosenkrantz explains. “We’re not just off on our own making something that might not be the best for the clinicians.” 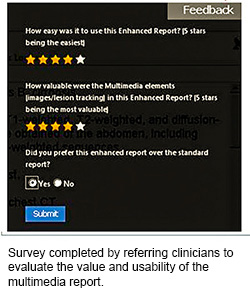 Radiologists have also adjusted their schedules to respond to referring physicians’ on-demand requests and other aspects of the initiatives. Recht says he expected radiologists to balk at that, but they have embraced the changes and he anticipates that the initiatives will actually improve their workflow by reducing unnecessary calls from the emergency department and by organizing their time better. He adds that radiologists also appreciate the attention the initiatives bring to radiology. “Everybody understands that we have to be careful to show referring physicians that we bring value to the team,” Recht says. “Through these initiatives, we’ve gone from infrequent interactions with referring clinicians to being a presence in their daily workflow. It’s tying us together and demonstrating our value so much more.”