TRIAD™ allows institutions to transmit images and data with just a few clicks.
Get a PDF version of this Case Study
Download

Radiology practices have traditionally sent their images and associated data to the ACR for accreditation and clinical trials on CDs or film. But those materials take a great deal of time and effort to produce and ship, and can be easily lost or damaged. To streamline the transmission process, the ACR has developed an electronic platform — known as Transfer of Images and Data (TRIAD) — that makes submitting images and data faster, simpler, and more secure.

Available as both a Web application and a software download, TRIAD is a standards-based solution that allows practices to transmit images and data for accreditation, clinical trials, and the ACR Dose Index Registry (DIR). It also supports such tools as personal health records and the ACR’s new Radiology Case Management System — a case-based content distribution program. “TRIAD is a platform that is flexible and nimble enough to support a variety of business objectives,” says Frank Shi, senior manager and architect of TRIAD at the ACR. “Within radiology organizations, a lot of workflows must be automated for efficiency and improved accuracy, and TRIAD provides the workflow execution capacity to manage those processes.” In clinical trials, for instance, trial data must be validated against protocols defined by the principal investigator. Rather than doing that tedious work manually, TRIAD reads the DICOM data sets and validates them automatically, Shi explains.

The ACR initially developed TRIAD to support data transfer for clinical trials. But over time, the technology team redesigned the software, expanding its capabilities to streamline accreditation and registry workflows. Now many institutions are using TRIAD to submit images and data to the ACR for CT, MRI, breast MRI, nuclear medicine, PET, and ultrasound accreditation, as well as for clinical trials and the DIR. Tao Wang, project manager for TRIAD at the ACR, says that the technology cuts out all of the unnecessary steps of preparing and shipping CDs for submissions. By automating image and data transmission, TRIAD maximizes productivity and streamlines the sharing of findings among stakeholders — two key goals of ACR’s Imaging 3.0TM. 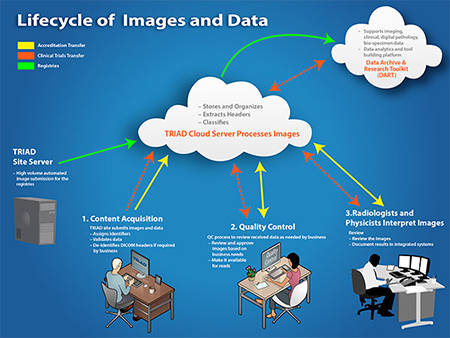 In the past, once the ACR received burned CDs, it would repackage the discs and ship them to the reviewers, who are responsible for assessing the quality of the images. Following their evaluations, the reviewers would send the CDs back to the ACR, which would finally ship them back to the institutions. This method had several drawbacks, according to Shi: “Producing and sending CDs is error-prone, clumsy, and takes a long time. That kind of manual process is burdensome and just cannot fly in this electronic age. Now image sharing is instant.”

Available to accreditation, clinical trial, and registry participants, TRIAD makes the submission process easier by allowing institutions to send encrypted electronic images and data files to the ACR server. It also gives institutions the flexibility to change, replace, or delete uploaded data with ease. Those who download the software can integrate the program with their PACS, allowing them to drag files directly into TRIAD. Once the files are ready to be sent, the user clicks a button to transmit the images and data to the ACR, which then forwards them to the reviewers.

As administrator at Advanced Imaging, Inc. in Pittsburgh, one of David Rimsek’s responsibilities includes overseeing ACR accreditation for MR, CT, and ultrasound at all of his institution’s facilities. Rimsek was among the first to use TRIAD to submit images and data for ultrasound accreditation and was amazed at how easy the program was to install and use. “In the past, the ultrasound accreditation was very labor-intensive because there are so many films and so much paperwork — with everything in duplicate,” Rimsek says. “I’m not an IT person, but I was easily able to download the TRIAD viewer and set everything up myself, and literally, I was able to submit everything that needed to be submitted in less than an hour.”

Institutions can elect to use TRIAD when they apply for accreditation or sign up for clinical trials — some of which now require TRIAD. Institutions that participate in the DIR can also use TRIAD as the only image submission mechanism. Once an institution joins one of those programs and elects to use TRIAD, downloading the software or using the Web-based solution is easy. Resources are available for institutions that need assistance installing or using the program.

“We’ve heard from some people who may not have an IT support department, and they’re concerned that if they use TRIAD and have questions, they’ll have to hire a consultant,” says Deeanna Hafer, director of accreditation operations at the ACR. “But we have user guides that walk them through downloading TRIAD, installing it, connecting it to their PACS, and using it. They can also call, and we can put them in touch with the TRIAD support team.”

Security is a concern any time images and data are transmitted outside of an institution. As a result, TRIAD encrypts patient information before the data is sent to the ACR, and it remains encrypted through the transmission and storage processes on the ACR’s server, says Ulku Kocabas, IT project manager at the ACR. For peace of mind, users can click a button that shows the before-and-after values of encrypted DICOM tags prior to submitting the data, Kocabas says. Shi notes that TRIAD is more secure than CDs and film because the images and data are less likely to be lost and because the system records when the data is accessed, where it was accessed, and what was viewed. “If you have CDs or film and you have personal data in there, how could you protect that?” he asks. “It’s almost impossible. TRIAD protects that information automatically.”

Although TRIAD already has a broad range of functionality, the ACR is in the process of adding new features to the platform, including data transmission for mammography accreditation, improved quality control for clinical trials, and compatibility with the National Cancer Institute’s National Clinical Trial Network. “TRIAD is a user-friendly system that can easily be integrated into institutions’ existing workflows,” Wang says. “It will save them time, increase their efficiency and data accuracy, streamline their participation in the accreditation process, and improve their communication with clinical trial sites.”

Radiologists who want to capitalize on TRIAD to automate the transmission of images and data for accreditation, clinical trials, and registry participation should: