From the Battlefield to the Reading Room

How can radiologists lead their teams in high-stakes environments?
Jump to Article
Tags
Share RecommendThanks for recommending this page!

The leader serves the team, not the other way around.

How can radiologists lead their teams in high-stakes environments?

“A good general, like any true leader, does not actually do anything, but only sees that enough people with proper training and the right weapons (in working order, and calculated to be effective against a specific enemy’s way of fighting) are in the right place and time with a motivation to fight.”1

Radiology training and practice provide little opportunity for formal education in leadership skills. The Bulletin caught up with U.S. Army Reserve Brig. General W. Scott Lynn, MD, a neuroradiologist with Radiology of Huntsville in Alabama, to discuss leadership, the fast-paced world of military radiology, and the key to quality patient care. Lynn, one of the highest ranking radiologists in the U.S. armed forces, was significant in the formation of the ACR Military Radiology Subcommittee. 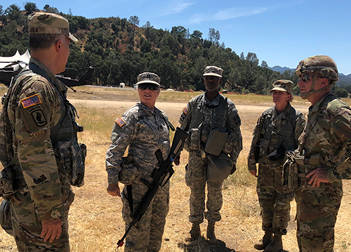 How have your experiences as a military radiologist changed the way you practice?

I carry foundational lessons learned in the U.S. armed forces to every aspect of both my military and civilian careers. I joined the U.S. Army after attending Vanderbilt University on a four-year Reserve Officer Training Corps scholarship. During freshman year, each cadet learns the importance of being a good follower, and several fundamental  leadership principles grow out of this experience. The cadet learns the importance of serving on a team and of subjugating their own personal interests to those of the group. You learn humility, realizing that others may know more than you do, or may have skills that you have not yet acquired. You learn how important it is for those in charge to build and maintain trust throughout the team by communicating clearly and effectively.

How does leadership on the battlefield translate to leadership in the radiology practice?

A team effort is fundamental to leadership in both fields. At its core, the art of good leadership transcends the boundaries of a particular endeavor. Coalescing an organization around a clear vision, inculcating and facilitating a “unity of effort” for the team, and inspiring men and women to most effectively use their strengths and talents — all of these form the foundation of good leadership.

In medical practice, patient care provides focus for the team’s personal and organizational efforts. Our radiology team includes everyone in our department: our transporters, technologists, nurses, and administrators all partner with us to care for the patient in a professional and kind way. In the military, our mission is similar, but things can get more complicated — America’s service members and their families are the focal point of care. However, this care takes place within the broader construct of the military and national priorities established by our elected civilian leaders. Sometimes these priorities take us to the battlefield, where resources and time can be extremely limited and risk is high.

You learn how important it is for those in charge to build and maintain trust throughout the team by communicating clearly and effectively.

Military service and College membership are highly complementary at the individual level. How is ACR addressing the needs of military radiologists?

While the ACR represents our collective interests in providing high-quality, efficient care to our patients, staying involved has been historically challenging for military physicians. Many of the ACR pathways to involvement start with state chapters. For an active-duty military physician who might be moving every two to four years, establishing ties to a state chapter can be difficult. For those serving as active reservists in the military, the old construct of serving one weekend a month and two weeks a year has changed as well — especially for physicians who perform leadership duties in addition to clinical functions. Much of the physician’s extra time is spent contributing to the military segment of organized medicine instead of the state arena. The ACR recognized those challenges in 2017 and has been actively working to encourage military radiologists through the Commission on General, Small, Emergency and/or Rural Practice.

What advice do you have for future radiologists?
Be a team player both within your practice and your hospital. At different points in my Army career, I’ve experienced firsthand how poor leadership can damage espirit de corps and hinder organizational effectiveness. The leader serves the team, not the other way around. One of my favorite Army lessons is that leaders eat last. The leader always makes sure the team has food before the leader eats. This way, if food is scarce or time to eat runs out, the leader goes hungry instead of the soldier. Leaders sacrifice for those they lead. These principles equip both physicians and Army officers to better serve their organizations and, ultimately, to provide quality care to patients.