Notes from the Road

Three radiology residents look back on their experience with the ACR Foundation’s Goldberg-Reeder Travel Grant.
Jump to Article
Tags
Share RecommendThanks for recommending this page!

We were able to make a difference in patient care every day. This has been the most rewarding experience I’ve had as a radiologist.

The ACR Foundation’s Goldberg-Reeder Travel Grant Program is designed to facilitate knowledge sharing, while assisting patients in low- and middle-income countries. The latest group of recipients brought their skills, expertise, and energy to Botswana and Zimbabwe, where they worked with local colleagues and patients to advance radiological care. Fresh from their travels, the recipients shared their insights and experiences with the Bulletin.

For Maria A. Bedoya, MD, a resident at the University of Pennsylvania, the experience of practicing in Botswana was profoundly impactful. Bedoya, who is about to start her pediatric radiology fellowship at Boston Children’s Hospital, was trained in underserved areas in Colombia and has made global health a focus throughout her work in radiology. When she arrived in Botswana’s capital, Gaborone, her focus was on education and hands-on ultrasound teaching.

“The first problem we tried to address was ultrasound technologist training,” says Bedoya. “Technologists in Botswana have limited training but they’re the ones actually interpreting images. Then we hoped to increase awareness about radiology across the board.”

To bridge the knowledge gap, Bedoya and her team conducted 23 different lectures on topics the local techs were interested in — everything from chest CTs to neonatal cranial ultrasounds and pediatric airway and bowel imaging. Each session was tailored to the audience and shared cutting-edge information often left out of the curriculum in Botswana. 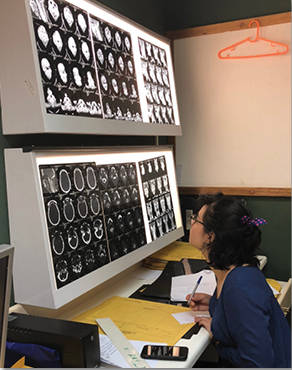 The goal for Bedoya was not just helping in the moment but also creating a long-term educational system in Botswana for residents who don’t have access to radiology training in the country. Bedoya worked in Princess Marina Hospital, the largest and only public hospital in Gaborone. The workflow, the hours, and the cases were completely different than those Bedoya was used to seeing in the United States. When she arrived, cases from months prior had piled up and many patients’ care had fallen to the wayside. One report showed a patient with 50 stones in his urinary tract and acute pulmonary embolism. “When I saw that, I realized many of these cases were things you can actually treat,” says Bedoya. “But I needed to communicate the findings. These are things we take for granted in the U.S. The tech explained to me, ‘We don’t have any established communication system here but that did not stop me from walking to the medical ward to discuss the findings.’”

On top of hosting lectures so that the local staff could better interpret images, Bedoya and her team worked through the backlog so that recent cases were being read soon after they were filed. “The techs had our phone numbers and they would call us all the time and ask us to look at cases,” Bedoya says. “I feel that we made a clinical impact every day we were in Bostwana.”

Jennifer Gillman, MD, a radiology resident at the Hospital of the University of Pennsylvania, worked at Princess Marina Hospital in Gaborone through the Botswana-UPenn Partnership. On a daily basis, Gillman worked alongside the clinicians — participating in bedside rounds and teaching bedside ultrasound techniques. “It was rewarding to directly see the daily impact radiologists have on clinical care,” says Gillman.

Gillman, a future pediatric radiology fellow at the Children’s Hospital of Philadelphia, spent much of her time at Princess Marina Hospital in the pediatric ward and neonatal ICU. Gillman and her team developed neonatal cranial head ultrasound workshops, consisting of didactic lectures and hands-on bedside ultrasound sessions. Faculty, residents, and students participated in these workshops. A workshop was also held for the ultrasound technologists. “Our goal was to provide practical knowledge and skills which could be used even after we returned home,” notes Gillman.

Gillman and her team also gained a better appreciation for the differences in daily radiology workflow. For Gillman, having been trained in the era of PACS, reading multiphase CT scans that were printed onto film took time to get used to. “Physically hanging each study was a challenge, and I had to adjust my search pattern,” says Gillman. Each report was then handwritten before being typed. “When you handwrite your reports, you learn to be concise and succinct — which is also important for report readability,” she says.

Gillman and her team quickly gained the trust of the clinicians in Princess Marina Hospital — providing timely and helpful imaging interpretations. Gillman became actively involved in the medical oncology clinic tumor board and internal medicine morning report. “We were able to make a difference in patient care every day,” says Gillman. “This has been the most rewarding experience I’ve had as a radiologist.”

Shekinah N. Elmore MD, a resident with the Harvard Radiation Oncology Program (HROP), went to Harare, Zimbabwe, where she focused on women with breast cancer as part of her research study with the HROP. The goal of Elmore’s project was to look for pathways where academic radiation oncology and global health could mix in an integrated way.

“There are lots of reasons women in Zimbabwe do or do not get radiation, and it is more socioeconomic than it is about clinical intervention,” says Elmore. “The care that they get there is really outstanding but obviously it is limited by resources — not really knowledge or knowhow, but financial resources on the patient side and the system side.”

Elmore broke her trip up into two parts. The first part helped set up the research infrastructure and baseline work for her research study. The goal of the study was to investigate the role of radiation in women post-mastectomy, in terms of overall survival and breast cancer-specific survival. The local doctors Elmore worked with offered up fresh perspectives and keen expertise that affected Elmore greatly. Elmore collaborated with local residents, and both parties were able to learn from one another and contribute to the research.

Elmore will soon be returning to Zimbabwe for phase two of her research study, which will focus on gathering even more data, making sure women are being screened for breast cancer, and determining the quality of life for women post-mastectomy — particularly focusing on hymphedema and adjustment to post-mastectomy body changes. “We really hope to improve care over time and make sure that women aren’t slipping through the cracks,” says Elmore. “It will be great to go back and feel more like we are going back to a familiar place — like going back to another home.”