My Most Embarrassing Flying Experience

Before deciding to go to med school, I served as a fighter pilot in the U.S. Air Force for 3 1/2 years. I can vividly remember my most embarrassing moment as a pilot. It occurred in Texas, where I was training to fly the F-86D Sabrejet.

One night I was assigned to take a T-33 (a two-seat jet fighter-trainer) and act as target for some F-86Ds set up by a ground radar station to make simulated attacks on me.

I had company — my friend and fellow pilot Ed Nemer in the back seat. On this particular night, he was just along for the ride. Since I was flying front seat, I’d do almost all the flying. It was difficult to fly, and especially to land, the T-33 from the back seat at night. The forward visibility was largely obstructed by the ejection seat of the pilot in front. 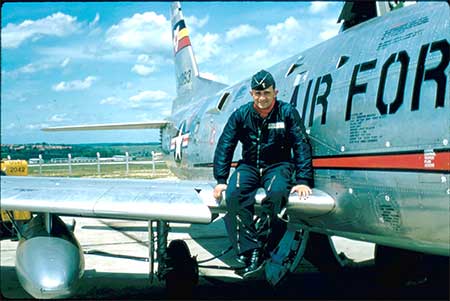 Before going down to the flight line to get ready for the mission, I went to eat dinner. Afterward, I noticed I wasn’t feeling very good: headache, not much appetite and slightly feverish. I should have cancelled, but it wasn’t considered good form to back out on a flight just because you were a little under the weather. But when feeling sick, the flight line is not a good place to be. It is hot and noisy with jet fuel fumes everywhere. In the cockpit, you are cramped and sweaty with a heavy helmet on your head, a rubber oxygen mask over your nose and mouth, and tight parachute straps over your shoulders.

I took off without incident and climbed up to altitude to meet up with the F-86Ds who’d be making the simulated firing passes at us. As time went on, I was feeling worse and worse. Nausea started to set in. I began thinking about the “barf bag” I was carrying in a pocket of my flight suit. It was a small plastic bag that most student pilots carried with them when they first started flight training, just in case the tailspins and acrobatics got the best of them.

By this point, I had my pilot’s wings and about 300 hours of flying time and had never gotten airsick, but I still carried the barf bag out of habit. When the F-86Ds finished their practice runs, I realized I’d better get down on the ground fast. To do that, I did what was called a split-S. It’s just like it sounds — the lower half of the letter S.

I rolled the T-33 upside down, then into a vertical dive and pulled out sharply at about 3,000 feet. It was the fastest way to lose lots of altitude quickly, but to get out of the vertical dive, you had to pull about 4 to 5 Gs to get back to level flight. Not a good move for someone whose stomach is already queasy.

By now I was really feeling terrible. I knew it was just a matter of time before I’d have to throw up, and the question was whether I could land us on the ground before then. Landing a jet fighter and vomiting were not compatible activities. But my friend Ed wasn’t thrilled with the idea of trying to make a night landing from the back seat and neither was I.

I maneuvered us into the traffic pattern, flew onto final approach and managed to touch down. As soon as I felt the wheels touch, I yelled over the intercom to Ed, “You have control of the plane!” I whipped off my oxygen mask and promptly threw up into my barf bag. Ed braked to a stop, opened the canopy and taxied us back to the parking revetment.

As soon as we parked, the crew chief followed the standard routine of wheeling a ladder up to the side of the plane and climbing up to help us get unstrapped and out of the cockpit. I’ll never forget the look of consternation and disgust on his face when the first thing I did was hand him a plastic bag full of vomit. I would have gladly crawled into the nearest hole if one were available. Thank God for that barf bag! Otherwise, it would have been all over the cockpit, and I’d have had to clean it up (an unwritten rule between pilots and crew chiefs).

Next morning I went to sick call, still nauseated and running a fever. The flight surgeon told me I had a case of gastroenteritis, probably caused by a virus or tainted food, and I spent the next two days in bed. Luckily for me, by the time I got back on flight status, the incident had been forgotten.

I bought a new barf bag and kept it in my flight suit pocket for the two remaining years of my flying career. I never had to use it again. 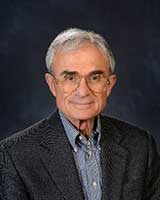 David C. Levin, MD, FACR, was an active member of the SRS who passed away on January 15, 2020. He submitted this story prior to publishing. Dr. Levin was Emeritus Professor and Emeritus Chairman of the Department of Radiology at Thomas Jefferson University Hospital, Jefferson Medical College. He made major contributions in the field of cardiovascular and interventional radiology and later made his mark with health services research in imaging, including the impact of physician self-referral.

Dr. Levin worked on many ACR committees and task forces. He was a 2006 ACR Gold Medalist and 2014 Leadership Luminary Honoree. He also served as chairman of the Council on Cardiovascular Radiology at the American Heart Association and president of the Society of Chairmen of Academic Radiology Departments. He also held a number of leadership positions in the RSNA.