Social Media and Radiation Oncology - A Decade in Review 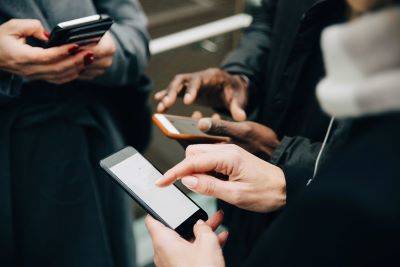 To start off this new decade, I thought it’d be interesting to look at the current state of social media use in the field of radiation oncology. Reflecting back, in the last decade personally I’ve become much more involved in social media outlets such as Twitter with the goal of not just connecting with other people socially but also using the social media network as a way to further my academic and professional learning. So here it is – social media in RO: a decade in review.

There have been a number of new papers in the past few years reflecting on social media practices and social media presence among radiation oncologists and related specialties. For example, an opinion piece published in Advances in Radiation Oncology in 2017 actually looked at the number of tweets sent per day during annual meetings and not surprisingly there has been a huge increase even from 2012–2016 for large meetings such as ASCO, RSNA, and ASTRO, somewhat proportional to the numbers of attendees respectively at each conference (see Figure 1).1 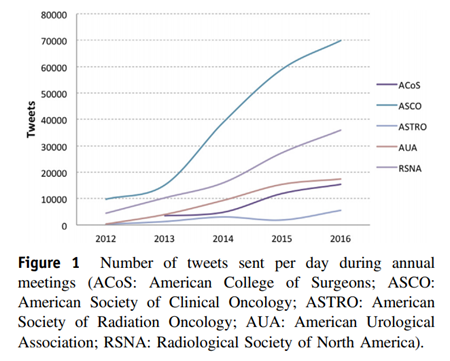 What has also been an interesting trend to observe is the growing number of Tweetorials and other related ways that researchers have explained their papers or relatively otherwise dense scientific concepts in a more accessible way using bite-sized tweets, plentiful images, and even sometimes humorous memes or hashtags to make a point. I’ve particularly enjoyed some of the Tweetorials and exposes that feature vulnerability in funny and humbling ways, such as huge leaders in the field tweeting funny memes about the circuitous and painstaking process of getting a grant funded or a paper published. The effect is to make big-name scientists more approachable and “human” in a way, as well as make traditionally taboo topics more widely discussed.

Social Media as a Tool for Community Building and Resource Sharing

An area of personal interest where Twitter and other social media outlets have been helpful is in framing the conversation regarding physician burnout. This is something that affects trainees and seasoned attendings alike. Twitter is more of a field-leveling tool — age doesn’t matter, everyone has the same number of character counts to state their opinion, and creativity and authenticity are valued. It provides a great forum for further discussion about burnout in a way that brings together communities to discuss very real, difficult topics in meaningful ways.

Another way that Twitter has brought communities together for discussion around topics of interest are #Tweetchats, in which Twitter users interested in a particular topic all “meet” online on the forum to have a lively real-time discussion. The ACR RFS has led several really successful #Tweetchats and I’m excited to see more of these in the future.

In terms of other social media tools, or just the online communities and forums in general, organizations such as ASTRO, ACRO, and the ACR are working on webinars, discussion groups, and other web-based platforms to not only bring people together but build networks. A new initiative that I’m very excited to launch soon is a webinar series from ACR focusing on RO-specific content, led by the ACR RO Commission Education Committee. Our first webinar will feature a panel discussion on leadership perspectives in RO and will be broadcast live on Feb. 5, 2020, starting at 5pm ET.

Tips for Success with Social Media

Becoming active on social media is not for everyone, and there are definitely some considerations to have in mind about social media presence as physicians and trainees. For starters, on forums such as Twitter it’s important to have a disclaimer that tweets represent your own individual views and are not necessarily reflective of your organization or employer’s values (unless, of course, you are managing the social media page of an organization in an official capacity). Second, be mindful that patients and potential future employers can find you on social media relatively easily. This is not to say that physicians shouldn’t interact with patients in this way, but analogous to the advice not to “friend” patients on Facebook, it is best to avoid any PHI/HIPAA on Twitter and other forums, and also to avoid any specific provider-patient advice on social media posts. Instead, general themes of patient care can still provide very powerful discussion tools amongst colleagues. And if patients reach out, advise them to see you in clinic (if that’s a possibility) for a more formal medical relationship or if not possible then to see their local provider in their area. And finally, just have fun learning and connecting. Social media can be a great way to connect with other providers and people in disparate areas.

That’s all, folks! Make sure to check out our upcoming ACR RadOnc Webinar!