The highlight was a plenary session given by DSI Chief Science Officer Keith J. Dreyer, DO, PhD, on Harnessing AI for use in medical imaging.

A standing-room-only crowd of more than 500 witnessed the live presentation. RSNA staff opened up two other rooms to allow more attendees to watch a live stream. Both rooms were filled to capacity.

Dreyer said the health care industry needs to accelerate adoption and use of AI in medicine. He also outlined the plan for the DSI to facilitate the validation and implementation of AI algorithms.

For the first time, the RSNA featured a Machine Learning Showcase, a destination for attendees to connect with companies and see the latest in Machine Learning and Artificial Intelligence software and products. 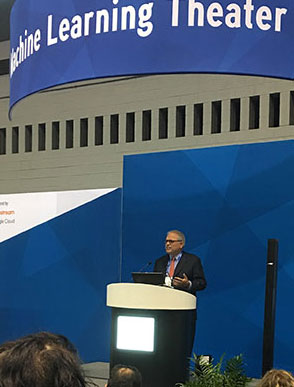 Bibb Allen, MD, the ACR DSI’s chief medical officer, presented at the RSNA Machine Learning Theater on “Leveraging the Value of Radiology Professionals to Facilitate the Development of Artificial Intelligence for Medical Imaging and the Radiological Sciences.”

He provided more detail on the approach of the DSI to team with radiology professionals, industry leaders and government agencies to guide the development, implementation and monitoring of clinically relevant, standardized AI use cases.

Using the framework for AI use case development championed by the ACR DSI, Nvidia and Nuance demonstrated a “soup to nuts” pilot for development, clinical implementation and performance monitoring of an AI algorithm for estimating skeletal age in children.

A DSI working group led by Matt Hawkins, MD, provided clinical specifications with the Bone Age Use Case and the Nvidia Digits platform served to train the algorithm. During the demo, X-rays of children’s hands were submitted as an input to the algorithm.

The estimated bone age from the algorithm, the corresponding reference image and reference images on either side of the estimate were populated in Nuance’s Powerscribe360 reporting system, as prescribed in the ACR DSI’s use case and integrated through the ACR’s OpenCARDS integration standard.

The DSI booth in the Showcase had continuous traffic from radiologists and radiology professionals, AI developers, industry partners, researchers, international and government representatives, providing an opportunity to forge new relationships for future collaborations.