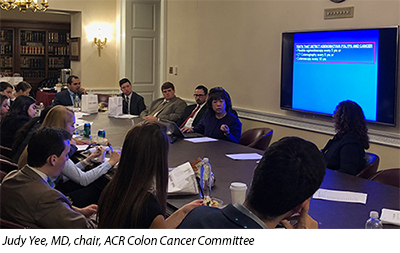 Staff members representing about 30 senators and congressional representatives gained a better understanding of the clinical and public health arguments for Medicare coverage of CT Colonography (CTC) — also called virtual colonoscopy — at a September 12th Capitol Hill briefing, sponsored by the American College of Radiology (ACR) and the Colorectal Cancer Alliance.

The event served as platform for general education about CTC and sought to recruit more congressional co-sponsors for H.R. 1298, the CT Colonography Screening for Colorectal Cancer Act of 2017. Introduced by Reps. Brad Wenstrup (R-OH) and Danny Davis (D-IL), the bipartisan legislation would mandate Medicare coverage of CTC colon cancer screenings. The bill currently has 86 cosponsors. 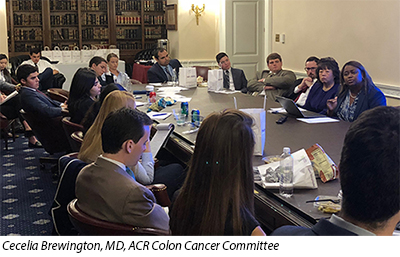 After covering the epidemiology of colorectal cancer, Judy Yee, MD, FACR, chair of the ACR Colon Cancer Committee, explained what a virtual colonoscopy entails and reminded staff members that private insurers are legally obligated to cover the screening procedure because of its “A” grade recommendation from the U.S. Preventive Services Task Force (USPSTF).

Colon Cancer Committee member Cecilia Brewington, MD, FACR, addressed CTC’s unique ability to overcome the resistance that special populations have against colon cancer screening because of social customs and their socioeconomic status. Medicare coverage of CTC could lead to lead to far higher compliance with recommendations for lifesaving colon cancer screening in these populations. 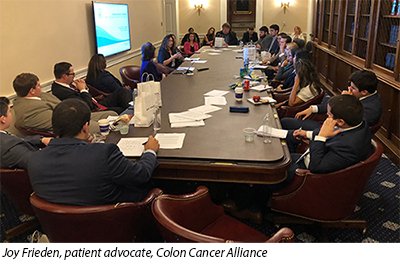 The briefing also provided the opportunity for two patients to share their personal experiences with colon cancer screening. Joy Freedman, a patient advocate from the Colorectal Cancer Alliance, discussed her battle with colorectal cancer that was diagnosed when she was 46. She adamantly supports patient access to all colorectal cancer screening options and emphasized the relevance of the USPSTF’s recommendation that the best test is the test that gets done. Elayne Zula, a patient who cannot tolerate invasive optical colonoscopy because of a tortuous colon, described the clinical challenges she faced because Medicare does not cover noninvasive CTC.