Home / Advocacy and Economics / Advocacy News / Advocacy In Action eNews / In the May 18 2019 Issue / Physician Leaders Address Surprise Billing
May 15, 2019

The issue of “surprise” or out-of-network medical bills remains a hot topic on Capitol Hill and continues to attract bipartisan and bicameral interest.

In addition to baseline support, the drive to identify a comprehensive legislative solution received an additional boost last week following the May 9 release of White House principles for addressing the problem of surprise billing in health care.

As lawmakers, their staffs and the Trump Administration continue to assess potential federal legislative solutions, the American College of Radiology (ACR) and others in the physician community have been collaborating to amplify the provider perspective and encourage a holistic policy approach.

As part of these efforts, the ACR joined seven other physician organizations in hosting a May 16 Congressional briefing, entitled “How to Protect Patients from Surprise Medical Bills: The Physicians’ Perspective.”

Potential solutions for the surprising billing issue remain in flux, though there is overwhelming agreement that no patient should have the added stress and financial burden of receiving a bill for out-of-network emergency care that they could not avoid or out-of-network care that they reasonably could have expected to be in-network. In engaging lawmakers on this topic, the physician community has been promoting a federal legislative solution that limits patients’ cost-sharing obligations to the in-network amount and prohibits balance billing when paired with a mechanism to allow health plans and providers to arrive at a fair payment rate. 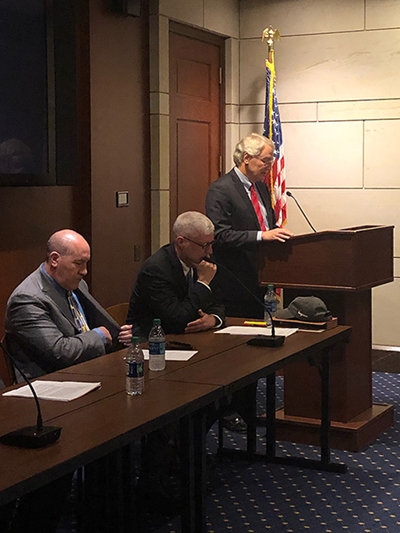 To amplify the physician perspective for addressing the issue of surprise or out-of-network medical bills, a recent panel-style briefing, moderated by Patrick V. Bailey, MD, medical director of advocacy for the American College of Surgeons, provided an opportunity for the host organizations to offer proactive solutions while simultaneously refuting several problematic policy proposals. In addition to Bailey’s opening comments, the session features remarks from physician leaders on the following topics:

The physician community supports an approach to surprise medical bills that protects patients, ensures insurance companies are establishing and maintaining robust provider networks and creates a mechanism for market-driven reimbursement. Unfortunately, some stakeholders are urging the abandonment of this straightforward approach in favor of a new, complex and untested model for hospital bundled billing. This concept may seem simple in theory, but in reality, this approach would be administratively complex. It would fundamentally change the relationship between hospitals and their physician partners and, alone, would do nothing to protect patients from surprise bills. Surprise bills are a direct result of a lack of negotiated contracts between the patient’s insurer and the hospital and/or physicians that provided their care. Bundling facility and physician payments simply allows insurers to transfer to hospitals their responsibility for establishing comprehensive physician networks and managing the associated financial risk.

Another proposed policy relates to the benchmarking of out-of-network rates. The physician community has been urging Congress to refrain from establishing arbitrary caps on payment for physicians treating out-of-network patients. If pursued, any guidelines or limits on what out-of-network providers are paid should reflect actual charge data for the same service in the same geographic area from a statistically significant and wholly independent database. In addition, any proposed benchmark should not be based on a percentage of Medicare rates, which have become increasingly inadequate in covering overhead costs, nor should they be based on in-network rates, which would eliminate the need for insurers to negotiate contracts in good faith. Any prohibition, whether state or federal, on billing from out-of-network providers not chosen by the patient must align with a corresponding payment process tied to the market value of physician services. To illustrate his cautionary note with regard to choosing an appropriate baseline, Champeau outlined the benchmarking mechanism included in California’s surprise billing law, which requires health plans and insurers to reimburse out-of-network physicians the greater of 125 percent of Medicare or the "average contracted rate" for the same or similar services in the same geographic region. In practice, the benchmark basically established an effective rate for potential surprise professional services and resulted in downward pressure on contracted rates and also negatively impacted negotiated rates for various specialties by setting a ceiling (i.e., based on the Medicare fee schedule) for out-of-network care. Ultimately, many physicians in California have since struggled to renew contracts with health plans and insurers with which they had longstanding contracts for reimbursement greater than 125 percent of the Medicare rate.

Finally, some proposals have included provisions that would require physicians to accept in-network rates from payers contracted with the hospital(s) where a physician is credentialed. This concept, labeled “network matching,” is more accurately characterized as forced contracting and equates to an unproven model to address surprise insurance gaps. If implemented, network matching will likely further erode network adequacy, increase costs (e.g., administrative costs of contracting, collection of payments, reconciling claims, etc.) and add legal complexities. Requiring all providers in a hospital to be in-network equates to coercive or forced contracting and eliminates a physician or physician practice from proactively negotiating an acceptable reimbursement for their services.

Overall, the briefing was well-attended and welcomed by bipartisan congressional staff from both the House and Senate. Various written materials were available to attendees, and staff members from the host organizations were on-hand to answer any additional questions following the conclusion of the event. Now that both chambers of Congress and the Administration are proactively engaged on this issue, the ACR Government Affairs team is anticipating the introduction of competing pieces of federal legislation, as well as hearing activity, over the next several weeks. The ACR team will continue to collaborate with colleagues from the other physician organizations, as well as Congressional staff and lawmakers, as policies to remedy the issue of “surprise” medical bills evolve. Additional information will be reported as it becomes available.