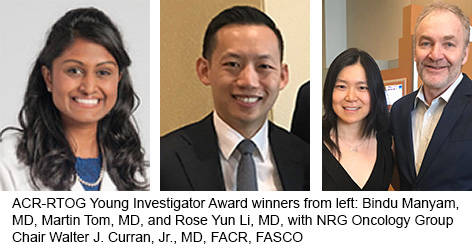 The recipients were Bindu Manyam, MD, and Martin Tom, MD, both radiation oncology residents at Cleveland Clinic, and Rose Yun Li, MD, a radiation oncology resident at the University of California, San Francisco. The ACR-RTOG Young Investigator Awards enabled them to attend many closed sessions at the NRG Oncology meeting, network with faculty and future mentors, learn the intricate processes involved in trial design, and experience the NRG Oncology New Investigators Committee session.

Following the meeting, Li praised the ACR and RTOG for helping make the experience possible. “As a future radiation oncologist and clinician scientist, getting this opportunity was eye-opening and inspiring,” she said. “It offered me a change to meet future mentors who are giants in our field.”

The event was also educational and enlightening for Tom. “Learning about and experiencing the clinical trial development process revealed to me the incredible detail and foresight involved in trial design,” he remembered. “The dedicated educational session for new investigators, which demonstrated how to become involved with NRG Oncology further, revealed to me NRG's commitment to young investigators.”

The meeting taught Manyam how young investigators can affect the governance of radiation oncology early in their careers. “The Young Investigator session allowed me to understand ways I can become involved, most notably through joining a committee and identifying an ancillary project,” she said.