The necessity of patient- and family-centered care has been stressed in lectures and media for more than two decades, but it may have never been articulated as well as the March 26th American College of Radiology (ACR) Grand Rounds presentation by Arun Krishnaraj, MD, MPH.

Krishnaraj argued radiologists can thrive – and, in fact, occupy an enviable position at the epicenter of healthcare - if they first earn their patients’ trust and allegiance. 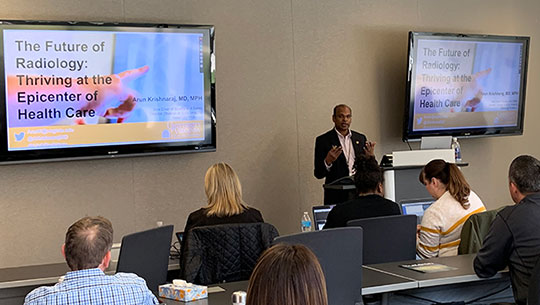 As co-chair of the ACR Informatics Committee of the Patient- and Family-Centered Care Commission and vice-chair of quality of and safety at the University of Virginia Medical Center, Krishnaraj stressed the importance of “value” as the new currency powering the transition away from volume-oriented, fee-for-service healthcare. “It is imperative among all physicians how we define value, create value and pursue it,” he said.

Radiologists occupy a tenuous position with artificial intelligence (AI) and the historical tendency of new imaging technologies to separate radiologists from their patients. AI may produce an even larger gap just at the moment when radiologists are compelled to close it.

Referring to the insights of radiology thought-leader Lawrence Muroff, MD, FACR, Krishnaraj said radiology could become extinct if radiologists do not assure that clinical encounters with patients about their medical imaging are thoughtful human-to-human encounters.

However, AI need not be an existential threat. By becoming their patients’ advocate, “artificial intelligence in its role to help radiologists in providing care will be the single best tool we’ve ever used,” he predicted.

Krishnaraj credited the ACR and its forward-looking Imaging 3.0™ initiative for moving the culture of radiology in the right direction by encouraging radiologists to deliver all the imaging care that is beneficial and none that is not. With more than 100 case studies readily available to ACR members in its digital library, “Imaging 3.0 offers a portfolio of tools that facilitates a re-alignment of incentives from volume to value and delivers the best possible care,” he said.

So, if radiologists must bridge a gap between patients and themselves, what do patients want to ensure a better healthcare experience? The ACR’s Patient- and Family-Centered Care Commission found that patients want access to their images and results, an ability to easily share images with other healthcare facilities and direct communications with their radiologists to help them understand the meaning of their reports.

Krishnaraj was joined in his lecture by patient advocate and “healthcare super-user” Amanda Itliong, who described the potentially life-altering implications of her pursuit for direct communications with a neuroradiologist before a scheduled brain scan.

When Itliong examined the imaging order the weekend before her Monday morning procedure, the only written instruction was “brain scan,” though she believed there were specific questions the neuroradiologist should attempt to answer about the suspected brain metastases from her rare form of ovarian cancer. She understood it was unlikely that a neuroradiologist would be familiar with her disease, just as her gynecologic oncologist would probably not be trained to diagnose her suspected brain metastases. 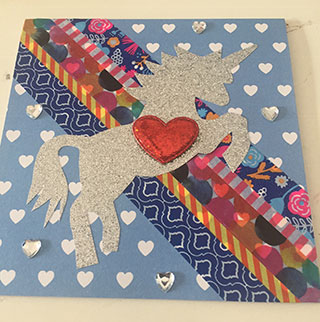 Such connections may be unusual, but they are the kind of communications patients want from their physicians. “They don’t think their physician should have his head buried behind a computer. [Patients don’t want to] follow 15 steps to get their physician to return a phone call or schedule an appointment,” Krishnaraj said.

This view can be realized if one takes cues from customer-friendly Amazon or the legacy of Steve Jobs at Apple. Krishnaraj and his team at the University of Virginia Health System are working with Jellyfish Health to develop a cell phone app that enables patients to identify the location of the university’s closest imaging service, schedule appointments and download forms that can be filled out before leaving home for imaging.

After the procedure, patients receive a follow-up phone call from the hospital or clinic and a satisfaction survey that invites them to describe their experiences and suggestions for improvement.

To help patients make sense of their studies, Krishnaraj and colleagues redesigned their reports using infographics to illustrate essential aspects of the imaging procedure, the presence or absence of the suspected disease or injury and to even allow the patient to scroll through the images. Actionable next steps are covered, and the radiology department’s contact information is included next to a photo of their radiologist on the report. 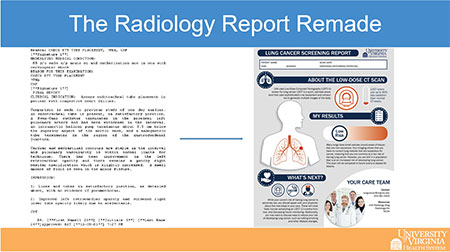 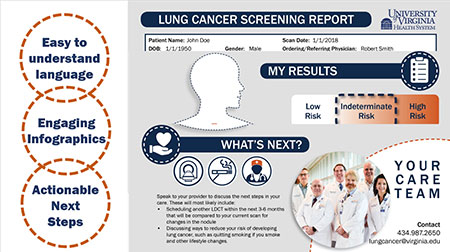 Instead of indecipherable descriptions of advanced imaging modalities, UVA patients can read “InsideView.” The webpage offers artfully illustrated modality-to-modality comparisons that describe their relative strengths and weaknesses and important applications. Patients can click on the modality their physician ordered to see the location of the facility and the out-of-pocket costs for their scan, Krishnaraj said.

The same principle of transparency applies to clinical outcomes. At the 2019 ACR Annual Meeting, UVA radiologists will present a paper on the design for one-page reports on pneumothorax. It covers the hospital’s rates, national rates and comparisons with similar facilities.

Observations gleaned from the follow-up surveys and other patient feedback led Krishnaraj and his team to redesign the format for their radiologists’ reports. The report for lung cancer screening features easy-to-understand language, including analogies about radiation dose that most patients can comprehend. Complex concepts are made simple with the liberal use of infographics.

For even stronger radiologist-patient relationships, some hospitals, such as Massachusetts General Hospital (MGH), have established radiology consultation clinics to facilitate face-to-face meetings for radiologists and their patients.

“We have to deliver greater value,” Krishnaraj said. “To do that, we must analyze, measure and constantly improve the patient experience.”